Romance yields a marriage of the old and new

Romance yields a marriage of the old and new 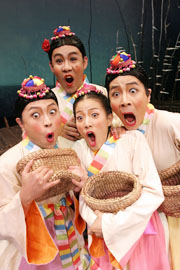 Musical director Choi Sung-shin was never a big fan of pansori. This traditional form of Korean musical performance, in which a single performer remains onstage for hours, was rather boring, he thought.
But Choi found himself falling in love with pansori when he had the chance to work with several seasoned exponents. In Choi’s hands, pansori forms the basis for his latest work, a musical called “Indang’s Blues.”
The show, which debuted in 2002, is playing in Seoul once again, this time with English subtitles at the Friday and weekend shows. It transfers to Korea after delighting audiences in Beijing.
In addition to pansori, other aspects of traditional Korean culture make an appearance. Choi and the playwright mix in the classic stories of “Shim Cheong,” about a girl who sacrifices herself for the sake of her blind father, and “Chunhyang,” about two lovers who defy the restrictions imposed by a rigid hierarchical society.
The first part of the title, “Indang,” is a pun on the name of the sea in Shim Cheong.
Choi weaves the two different tales into a 100-minute musical about a girl named Chunhyang who is in love with a man from a higher social class. Although she loves her father dearly, she’s heartbroken when he asks her to marry a middle-aged aristocrat, who is wealthier and more socially established than her beau. Chunhyang is torn between a marriage of convenience and one of true love.
“I wanted to evoke the beauty from the past to spotlight love and relationships today,” Choi said.
The musical also includes rap, Choi said, and will be a visual treat. His troupe has taken great care to present the authentic beauty of hanbok, or traditional Korean clothes.
At a time when theatergoers often face high ticket prices, Indang’s Blues is refreshingly affordable. Tickets range from 20,000 won ($22) to 30,000 won for adults.

*Friday performances start at 4 and 8 p.m., followed by Saturday performances at 4 and 7:30 p.m. The Sunday performance is at 4 p.m. Sadari Art Center sits in Daehangno, central Seoul, where several theaters are clustered. Go to Hyehwa Station, line No. 4, exit No. 1. For details, call 011-269-1628 or see www.paim.co.kr.