Old men and the wise

Old men and the wise 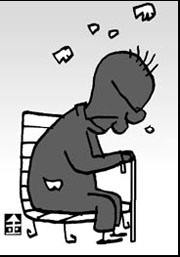 Growing older doesn’t necessarily mean you’re going to get wiser, especially in culture and arts. Many contemporary artists became legends because they died young. Think of James Dean, Kurt Cobain, Jim Morrison, Kim Hyun-sik and Kim Gwang-seok. They remain inspirational to fans because they never grew old.
A director’s early movies are often his best. Later films are often synonymous with earlier work and act to reconfirm his fame. When Martin Scorsese swept Best Picture Award and Best Director Award at the Oscars after five failed attempts, no one believed the director had produced his best film in “The Departed.” He was given the award for his lifetime contributions to motion pictures.
There are exceptions, of course. Clint Eastwood, 77, actor and director, is still producing quality movies despite his advanced years.
Eastwood started out playing macho characters in westerns and cop movies. His first feature as director was “Play Misty for Me” in 1971. Over the years his work has grown in maturity and depth. He’s won the Oscar for Best Director twice, first with “Unforgiven” in 1993, a postmodern take on westerns, and next with “Million Dollar Baby” in 2005.
But age is surely an asset in literature. A writer’s work is likely to benefit from wisdom accumulated over the years. A more mature writer is likely to possess much more insight than a younger writer. Take “The Old Man and the Sea” for example. Hemingway published this novella when he was 63. The writer said he’d always wanted to write that story, and he finally did. This epic tale sees an aging Cuban fisherman struggle to catch a huge marlin, a sensitive story about the dignity of humanity. The book received a Pulitzer in 1953 and Hemingway won the Nobel Prize for Literature in 1954.
Hemingway represented the lost generation between the two World Wars, but the Old Man conveys depth of thought and feeling a younger Hemingway did not possess. The fisherman in the story is not just an old man, but someone who fathoms what it means to live, abandoning all worldly desires. His lifetime experience is a beacon to younger people, his wisdom a light to those in the dark.
A recent issue in Korea concerns an aged politician considering running for president. Thanks to him, the presidential race is much more dramatic and thrilling for spectators. But he thinks no one but him can do the job, which doesn’t cast him in such a great light. Society pines for older people who can be respected and who can lead.

The writer is deputy culture and sports editor of the JoongAng Ilbo.