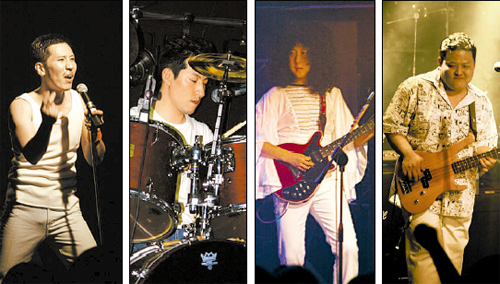 People say imitation is the sincerest form of flattery. If that’s the case, tribute bands are the ultimate act of hero worship. In Korea, one band has been genuflecting at the shrine of the English rock group Queen for a decade. That band is called 0vueen.
They call themselves 0vueen because Korea no longer has a queen but a first lady. If 0 is read yeong, which is Korean for zero, 0vueen sounds similar to Korean word yeongbuin, meaning first lady. That’s the theory, anyway.
But do the real Queen band members know about their Korean disciples? It’s a question that doesn’t concern 0vueen. “Our gigs are not aimed at getting their attention,” the Korean rockers said. “We play their music because we adore them.” They expect nothing in return for their devotion.
To mark their 10th anniversary, Ovueen will hold a memorial concert for Freddie Mercury on Nov. 24, the day Queen’s lead singer passed away. It will be a night of celebration as well as sadness as fans and the band itself remember their idol.
The venue is, appropriately enough, the Queen Live Hall near Ewha Woman’s University. The JoongAng Ilbo recently caught up with the band at a practice room in Hongdae.
The classic Queen line up, before Mercury died, consisted of Mercury, guitarist Brian May, drummer Roger Taylor and bassist John Deacon.
But there are five band members in 0vueen. Shin Chang-yeop, 32, a semiconductor engineer, takes on vocals, but not the keyboards; unlike Freddie, so Jeong A-ran, 25, a journalist for a game Webzine, takes over on piano.
Our first question was, why Queen?
Shin said, “I happened to watch some videos of Queen’s concert when I was a teenager. It was total culture shock. The entire audience was singing along with Freddie and imitating his every gesture. Their songs sounded different at each new concert because the band was constantly improvising and developing.”
Kim Jong-ho, 37, the guitarist and a banker, said “I was into Metallica and I was scornful when I first heard Queen’s “Radio Ga Ga.” That’s not rock, I thought. But a colleague lent me Queen’s second and third albums, and my life changed”
An Cheol-min, 33, the bassist and an executive in a trading company, said, “I fell in love with the lyrics in “Bohemian Rhapsody.” Their music covers all genres: rock, heavy metal, pop and dance.”
The drummer Jeong Gwan-hun, 30, who works for a Japanese company, started the tribute band in 1997. At that time he was running an online club for Queen fans.
He recruited all the band members, and they now hold concerts three times a year. Shin took over vocals in 2000 and then 0vueen started to attract greater public interest.
Concert clips posted on YouTube have won critical praise. Comments like “This is the best Queen cover I’ve ever heard” are not unusual. For many, Shin Chang-yeop’s singing soars higher than simple imitation. 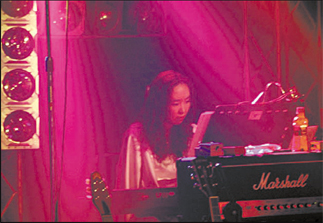 Jeong only took up the drums because he wanted to perform Queen’s music.
“I’m no martyr, and I’m not aiming for a Queen revival. But it’s hugely rewarding if more people in Korea can hear these fantastic songs through our concerts.”
Life as a tribute band doesn’t come without its challenges. Band members work full time so practice sessions are hard to arrange.
They have to pay all their expenses, and leasing out concert halls isn’t cheap. When audiences dwindle, the band loses out financially. But there are no regrets. The band is a labor of love, not a vehicle for profit.
“I secretly played the drums because my parents didn’t like me playing music,” Jeong said.
“On the way home after concerts, I had to throw away flowers from fans to avoid upsetting my mom and dad. These days they don’t object, except for the wigs I wear at the concerts.”
Kim said he still gets teased. “My friends call me an old bachelor who only listens to Queen. But I love Queen more than women. When I leap on stage, I become Brian May.” May is Queen’s lead guitarist.
Shin has also had to endure some negativity. “When I finished my first concert seven years ago, I had to endure sarcastic reactions. ‘How dare he try to sing like Freddie Mercury!’ I heard people say. But I practiced like crazy and sang my heart out when I was driving. I got quite a few stares.”
After 10 years, 0vueen’s performances have become more sophisticated and similar to that of the original group. The band bought the same equipment Queen used and hired an exclusive stylist to give them a Queen-style makeover. When you see them on stage, the band could be the real thing.
“At one concert there were only 350 paying guests but we performed 30 songs in a row,” Jeong said. “Some of the audience were in their 40s or 50s, so we think Queen’s music attracts all generations.”
There’s only one problem with their Queen look ― Ovueen’s bassist is much heavier than Queen bassist John Deacon.
“I hear people complaining that but I can’t control my body,” An said. “I also do backing vocals as well as play the bass, so please cut me some slack.”
Kim said the band is also considering writing their own Queen-inspired compositions, like the Japanese Queen tribute band Kween.
“If Queen ever come to Korea, we can be the opening band,” Kim said. “That would be the ultimate tribute.”
Ovueen will perform at 7 p.m. Nov. 24 at Queen Live Hall near Ewha Womans University, Line No. 2. Tickets are 10,000 won in advance and 15,000 won at the door.
An online club for Oveen is at http://cafe.daum.net/Ovueen.
The home page for the drummer is at http://www.rtww.net/. His phone numbers are 016-275-8938 or 02-780-6070 (office). E-mail addresses are towermmm@hanmail.net and master@rt-ww.net.