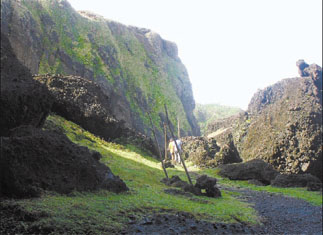 Tourists walk up a hill on Green Island, about 20 miles off the east coast of Taiwan. [REUTERS]

GREEN ISLAND, Taiwan ― A tropical island off the coast of Taiwan has become a victim of its own success as pollution caused by a recent spike in tourism threatens its reputation as the best diving spot in East Asia.
The aptly named 15-square-kilometer Green Island, an hour’s ferry ride from Taiwan’s main island, is fast losing its luster due to garbage and excrement dumped into its azure waters and shrinking reefs plundered by coral-robbing tourists.
“The water is not as clear as it used to be,” a dismayed Taiwanese Vice President Annette Lu told Reuters after surveying Green Island by boat in October. “That’s what happens when a place chooses to grow.”
Coral reefs, colorful fish, a warm ocean current, mild off-season weather and ferry links make Green Island arguably one of East Asia’s best places to dive or snorkel.
But the island’s infrastructure has not kept up with the influx of tourists, and the family-run hotels that dot the island throw raw sewage and garbage in the sea because there is no central sewage and garbage treatment and disposal system.
Corals have deteriorated and once common sea turtles and hammerhead sharks are seldom seen around the island.
“When I first dived on Green Island 16 years ago, it had abundant marine life, and it is now a shadow of its former self,” said Taiwan-based diving trainer Andrew Gray.
“Unless the government acts, the underwater environment will be steadily depleted and eventually everyone will suffer.”
Once infamous for its prison for political dissidents during Taiwan’s pre-democracy era, Green Island began looking to its underwater scenery and a rare salt water hot spring in 1991 to draw tourists from the crowded, overbuilt cities of Taiwan.
Visitors reached 382,908 last year, up 40 percent from just five years earlier, according to government statistics.
Some tourists cause damage by taking bits of coral from the reefs despite warnings in a video shown aboard the Green Island ferries for the past year. Tourists on return visits to the island are noticing murky water and trash along the shore.
“You could see more of the ocean before,” said Joy Wu, 19, who is on her fourth visit to the island.
Wu, like many others who have seen Green Island in its heyday, blames development and the tourism industry for the damage.
“There’s no way to stop growth. If there’s a way to make money, people here will do whatever it takes to make some,” she said.
The government is now considering constructing a water treatment plant but it may take years for it to be built.
Those in the local tourist trade say things are not as bad as they seem and note that some hotels and restaurants treat their waste on site.
“Environmental protection is being done well on Green Island,” said Chen I-hsiang, owner of the 50-room Kungkuan Hotel. “It’s better than on the main island of Taiwan, since we have no major industry.”
Laws on the island ban high-rise hotels and sprawling luxury resorts, but authorities have so far resisted calls to limit the tourist headcount or risk upsetting travelers by charging environmental impact fees. Such fees are required for diving spots elsewhere.
Reuters