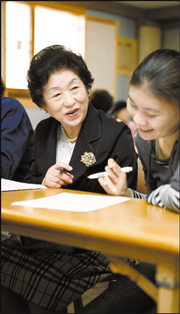 Noh Hwa-ja, 68, is busier than ever in her role as teacher, driver and all-round carer for foreign wives.

“I look after them as if they were my own daughters-in-law,” Noh Hwa-ja, an enterprising Korean language teacher, said. “If I didn’t, this job would be hard to do.”
At 68, Noh is the head Korean language teacher at the foreign wives education center, a division of the Gyeongju Senior Club. There are currently about 400 foreign wives in Gyeongju and about 20 female Korean citizens in the Gyeongju Senior Club involved in this program.
Every Friday, Noh becomes the guardian, teacher and driver for Wingt Eting, 23, a Vietnamese woman who married a Korean two years ago. Noh also babysits for Eting.
In this program, organized by the Gyeongju Senior Club, a Korean female senior citizen looks after a foreign wife one day a week. On Oct. 19, the pair participated in a Korean language and cooking class, a favorite among the foreign wives.
On the day of my visit, they were making cucumber and radish kimchi. There were some babies who had come along with their mothers, and the Korean teachers babysat them during the class. As Eting’s house is a bit far from the center, Noh drives Eting home.
“I’m not tired at all,” Noh said. “After six months, I can see Eting’s Korean is improving.”
Noh is also the leader of a local women’s community group, works for an international women’s volunteer group and she investigates the dumping of illegal waste on behalf of a women’s environmental group.
In addition, she is a commentator on cultural heritage from the Silla Dynasty.
“When you stop being active, you get sick,” Noh said.
jainnie@joongang.co.k