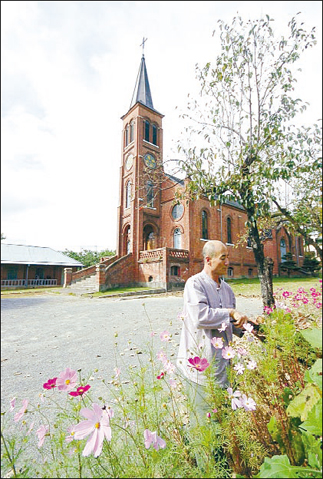 What Chilgok lacks in commercial and historical pulling power it makes up in terms of inner spiritual beauty. Its relative isolation from the mainstream tourist beat means Chilgok maintains a sense of tranquility that other Korean towns can only envy. 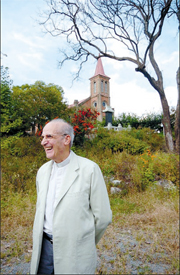 Hyun Ik-hyun in front of the Chilgok Gasil Catholic Church and a 200-year-old tree near the banks of the Nakdong River. By Lee Ho-jeong

By midnight the bars are closed and the people are tucked in bed. The darkened streets are empty and the night is still. The sleepy provincial county of Chilgok in North Gyeongsang has gone to bed early as usual and will wake up to another hushed morning, surrounded by majestic hills and the vast plains through which the Nakdong River runs.
Most motorists bypass this serene county in favor of stopovers in more urbane cities such as Daegu, or better known sites in North Gyeongsang such as Andong or Gyeongju. Or they simply drive straight down to the far southerly regions of the Korean Peninsula, down to the beaches on the rocky coast.
But what Chilgok lacks in commercial and historical pulling power it makes up in terms of inner spiritual beauty. Its relative isolation from the mainstream tourist beat means Chilgok maintains a sense of tranquility that other Korean towns can only envy.
That tranquility is perhaps partly due to the area’s rich Catholic heritage, of which the people of Chilgok are justly proud. Any visit to Chilgok would be incomplete without a tour of the religious sites that give the area its unique character.
Catholicism first came to Korea in 1784, courtesy of Lee Seung-hoon, a young Korean who had converted in China. But Catholicism didn't reach Chilgok until 1895, an indication of the level of opposition the religion faced during its early years.
The persecution of Catholics, particularly the “Great Persecution of 1866,” a government campaign to wipe out the faith, meant many believers were forced to flee.
Chilgok County offered some refuge, and since then the Catholic faith has imparted a significant influence over the area.

A statue of the Virgin Mary greets visitors at the entrance to the Hanti retreat. By Lee Ho-jeong

The tour begins in Waegwan, in the central part of the county, at the Order of St. Benedict Waegwan Abbey, located within easy walking distance of the train station. The monastery is famous for its sausages, rumored to be made the traditional German way, but not on sale to the general public, unfortunately.
“You can only try our sausages if you dine with the monks,” said Im Young-gyun, or Father Clemens, who heads the monastery. This is possible only if you stay at the monastery’s retreat. Guests get the chance to eat with the monks and chip in doing some chores.
An old redbrick church stands at the entrance. At this time of year the leaves on the nearby trees begin turning red, yellow and orange, perfectly matching the color of the building. The church is hardly used these days and the doors are usually locked.
Im said the church actually predates the monastery. “It was was built in 1928, but the Order of St. Benedict didn’t settle in Chilgok until 1952,” he said.
“We use the church as a lecture hall from time to time, but not for mass,” he added.
The Order of St. Benedict first came to Seoul in 1909, and relocated to North Korea in 1920. Part of the Order split and formed a branch in China in 1930.
“Our headquarters are still in North Korea and we plan to move to the North after reunification,” Im said.
Much of the monastery is off limits to visitors. But if you call ahead, you can arrange tours. You’ll get to see the burned-out dormitories, destroyed by an accidental fire earlier this year. On one of the blackened walls the haunting mark of a cross can be seen. Be warned, though: The stairs to the second floor are very unstable.
You can also visit a stained-glass window workshop on the grounds of the monastery. The windows made here are bound for Catholic churches across the country.
If you wish to stay at the retreat, call (054) 970-2000 or visit www.osb.or.kr or www.waegwan.net. The Web sites are all in Korean. One night with three meals costs 30,000 won ($33) per person.
Your inner peace tour continues as you travel south from Saint Benedict’s along the banks of Nakdong River toward Naksan Gasil Catholic Church.
The original church was actually housed in a hanok, a traditional Korean home, and the church itself was built between 1922 and 1923. A huge tree now stands near where the hanok used to be, in an open spot in front of the church. The tree is 200 years old, according to Hyun Ik-hyun, 67, also known as Father Bartholomaeus Henneken. 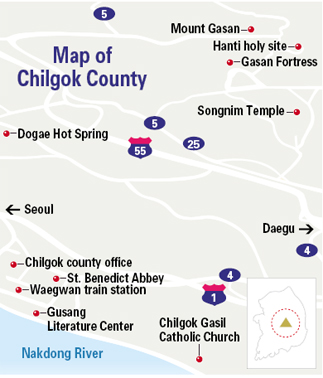 Hyun, a German priest who speaks fluent Korean, first came to live in Korea in 1967. He has been in charge of the church since 1999.
“While most Catholic churches serve the Virgin Mary, we also worship Ana, Maria’s mother and Jesus’s grandmother,” Hyun said.
The church was recently designated a cultural asset by the government. The statue of Ana and Maria was brought over from France in 1924. It’s the only one of its kind in Korea.
The long panel of stained-glass windows that narrate stories from the New Testament were manufactured at the workshop of St. Benedict’s Abbey.
Mass is still held at the church and next door is a redbrick building that used to be the living quarters for the priests. Today one of the rooms is used as a museum. It contains tools used at the church in its early years, including a barrel that was used for crushing grapes for wine and an old film projector. There’s also a 100-year-old Bible.
The church caught the attention of location scouts for Heo In-mu’s 2004 comedy “Shinbu sueob,” or “Love So Divine.”
For more about the church, visit www.gasil.kr.
If you make reservations well in advance, Hyun will give a personal tour. But bear in mind that men of God are busy and might not be able to assist.
Another Catholic site is Hanti on the eastern shore of the Nakdong River. This was where Catholics settled to escape religious persecution during the final throes of the Joseon Dynasty. Despite their best efforts to protect themselves, many still suffered during the bloody suppression.
Hanti is now one of the most famous Catholic retreats in Korea. There’s a museum built in the style of the living quarters used by Catholics from the Joseon period. The houses look like traditional lower-class housing with clay walls and thatched roofs. In the fall the long path leading up to the retreat is alive with autumnal colors. Hidden among the trees is a small white statue of the Virgin Mary.
Even though the area is well known for its Catholic heritage, there are also Buddhist sites co-existing in perfect harmony, enhancing the spiritual atmosphere. Songnim Buddhist Temple in Dongmyeon, which lies close to Hanti, is a great spot for a lazy afternoon.
The temple was built in 544 during the Silla Dynasty. Over the past 1,500 years it has undergone many transformations. Following successive Mongolian and Japanese invasions, the temple has been rebuilt on two occasions, in 1597 and in 1858.
On the temple grounds is a five-floor brick pagoda in front of the main building. The wooden Buddha statues are believed to have been made during the Silla Dynasty.
Another key attraction in the area of historical more than religious importance is Gasan Fortress. Located between Hanti and the Buddhist temple, Gasan fortress is not especially striking at first. Much of the stonework has been replaced in recent years. But an interesting fact about the fort is that it took 99 years to build, starting in 1640. Just after construction started Korea was invaded by the Mongols and the Japanese, but since then there haven’t been any major invasions of Korean sovereign territory. Thus the fortress became redundant in the relatively peaceful years of the latter Joseon Dynasty.
The fortress was built into rock on Mount Gasan, a stunning setting for a military outpost.
A great way to finish off your tour is to feast on a local delicacy ― makchang.
Like many of its neighbors, including Daegu, Chilgok has wonderful makchang restaurants, eateries that specialize in pork and beef intestines which are grilled over hot coals. The restaurant Chililgobchang, (054) 975-7171, located near downtown Waegwan Elementary School, serves up succulent makchang. The restaurant is less than a five-minute walk from Gusang Literature Center. The poet Gusang was born in Seoul in 1919, and he lived in Waegwan from 1953 to 1974.
The restaurant is just what a small town restaurant should be. Homely and cozy, this diner serves sweet-tasting makchang accompanied with the bitter taste of soju.

Another popular restaurant for light meals would be the rundown cafe, (054) 975 5662, on the road between Waegwan and Gasan, next to the the Dogae Hot Spring. The restaurant has no name. The sign just reads “sundae,” or Korean blood sausage, a popular street food.
Also on sale is cheonggukjang, a fermented bean soup with a unique aroma that, although nutritious, takes some getting used to.
Run by an old grandmother for the past 12 years, the restaurant is becoming a popular dining place for travelers in need of sustenance after a long, but spiritually rewarding, exploration of Chilgok County.