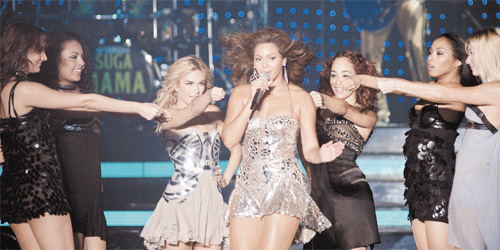 So what if Beyonce had her audience waiting nearly an hour, and so what if the pop diva ended her concert 15 minutes earlier than scheduled?
No one in the 20,000-strong audience in Seoul on Saturday night seemed to be complaining.
The truth is the 25-year-old former Destiny’s Child star rocked Olympic Park for two straight nights with an electrifying performance that had all the glamour and glitz that Beyonce fans had anticipated.
This was “The Beyonce Experience” world tour, and Korea was the second to last show.
But you’d never have guessed it, judging by the volcanic energy that the show pumped out.
The 10-time Grammy winner from Texas breezed into Seoul Thursday, a day after Paris Hilton, for a R&B/pop extravaganza over two nights starting Friday.
Scintillating vocal depth and range; wild, chaotic dancing; breathtaking costume changes and irrepressible music proved what a class act Beyonce has become.
When she sang her massive hit “Irreplaceable,” the crowd went berserk, and when she drew the shape of a heart with her hands, hearts melted.
This was pretty much an all female act, showwomanship of the highest order.
Apart from four pumped up, glistening male dancers, the backup singers, foxy dancers, trio of drummers, trumpet player, saxophone player, guitarists and bass were all women.
At the end of the night the audience was begging for more, but no encore was forthcoming, which must have disappointed many.
But Beyonce did sing “Happy Birthday” for anyone whose birthday it was.
And two guys sat up front won’t forget the evening in a hurry. Beyonce threw them her face towel as she closed her act.