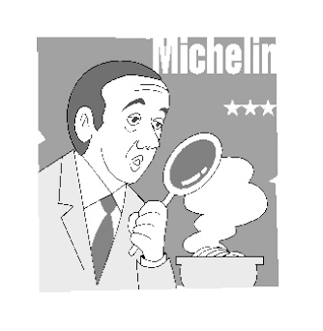 The Frenchman Andre Michelin invented the pneumatic motorcar tire. Another accomplishment of Andre Michelin was the Michelin Guidebook. This guidebook, first published in 1900, showed the locations of tire merchants, gas stations and hotels. It was given free to motorists in case of a flat tire, and its purpose was to help develop the leisure use of automobiles and eventually sell more Michelin tires.
After the guidebook began to be sold in the 1920s, anonymous inspectors visited restaurants and hotels and rated them by stars. One star meant “a very good restaurant in this category;” two stars meant “excellent cooking, worth a detour;” and three stars, the highest rating, was awarded for “exceptional cuisine, worth a special journey.” Among the 16,150 restaurants that were examined, about 1,606 (9.9 percent) received at least one star. Only 0.3 percent, a total of 56 restaurants, have received three stars. It can seem nearly as hard as catching a real star to receive three Michelin stars.
Michelin inspectors are professionals who have worked in restaurants and hotels for over five years. They examine the food in five categories: quality of ingredients, recipe and depth of the sauce, characteristics, the balance of price and quality of the dish and consistency. A restaurant that receives two stars can see its sales increase at least 20 percent and a three-star restaurant may have a waiting list of three to six months.
Restaurants in Japan are agitated since Michelin recently inspected restaurants and hotels in Tokyo, the first time it has done this in Asia. The results will be announced this week. Michelin inspectors visited 1,300 restaurants and 50 hotels in Tokyo disguised as customers. The hottest issue is how many will receive three stars.
Japanese traditional restaurants are opposed to the ratings. They see cooking as a total art, where everything, from the dishes used to serve the cuisine, to the interior decor and atmosphere of the restaurant is integral to the enjoyment of food. Some old prestigious restaurants have refused to allow Michelin to write about their place.
Our presidential election, only a month away, has reached its peak with BBK’s founder Kim Gyeong-jun returning to Korea. For the voters, the last phase of evaluation is at hand. Let’s take a page out of Michelin’s five standards: humanity (ingredients), policy (recipe), originality (characteristics), comparative goodwill (balance of price and the quality of the dish) and authenticity (consistency). For the remaining month of the election season, let’s all become Michelin inspectors.