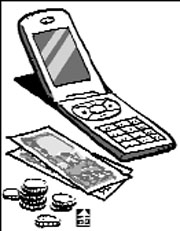 Hermes is the fastest of all of the gods, serving as the messenger in Greek mythology. Basking in the warm glow of Zeus, king of the gods, he moved about energetically as the envoy in the sanctuary of Mount Olympus.
Named after Hermes, one of the most popular luxury brands in the world was created in France.
By the 19th century, the social communications made by human beings had not advanced much past those figures in mythology, as seen in the messenger from Olympus.
Until Morse Code started being used between Washington and Baltimore in 1844, communication had pretty much been monopolized by the relatively privileged few for millennia.
The telecommunications services are regarded as requisites in our daily lives, going far beyond the level of just being popular.
The Bank of Korea showed that the overall costs in the communications sector, including telephones and Web services that the Korean households spent in 2005 made up 5.4 percent of all spending, three times more than the same statistic in the United States.
With groceries, a basic staple, reaching 25.9 percent, Engel’s coefficient [the proportion of income spent on food] has fallen for the last three years, whereas the amount that people have spent on communicating with others has skyrocketed.
Indeed, the number of subscribers to cell phone services exceeded 43 million, more than 90 percent of all Koreans.
Many people admit they feel anxious whenever they are without their phone. In some ways, it is the inevitable result of the era of Internet communications. In this era, intangible goods are substituted gradually for tangible goods.
Rather than ownership, the right of access has become the goal of promising businesses these days. That is the core element of mobile telecommunications.
Exactly 150 years have passed since the German statistician Engels devised the Engel’s coefficient.
The long-ago discovery made clear the connection between the amount of money spent on food and quality of life.
However, if communication costs get settled as a fixed cost in our daily lives, like a basic staple, the formula should be totally reworked, creating a Korean-style Engel’s coefficient.
In addition, when we look at other expenses, such as the money spent on private tutoring and mortgage payments, we can find such fixed costs at every turn.