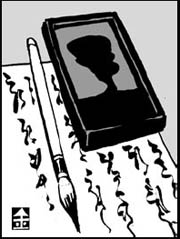 Wang Xizhi made headlines recently among art lovers in Asia. The renowned calligrapher, who lived from 307 to 365, was in the spotlight recently as news that a replica of his calligraphy would be offered at a Hong Kong auction house for more than 4 billion won ($4.3 million) was announced early last month. If that’s what a replica of 17 characters is worth, what his original work would be worth boggles the mind.
Following that, this month sees the news that a book that describes his writing style was restored to its original status. That book is also a replica of Wang’s calligraphy. It was made during the Tang period, lost at the end of the 19th century and then migrated to Japan, only to be burned by the atomic bomb during World War II. Interestingly enough, China and Japan found the photos of the book and restored it using digital technology.
The story tells us what it takes to be called an immortal master of calligraphy. Wang is the best of the best calligraphers China has ever produced. He raised his talent to the status of divinity with unrelenting hard work.
Many anecdotes remember his extraordinary dedication to his calligraphy. Among other stories that illustrate this, one says he turned the water of an entire pond black by washing the brush he used to practice writing in the pond. The pond is called the Pond of Black Ink and is located in Jiangxi Province, China.
Another story goes that the artist was so engrossed with calligraphy and regularly skipped meals; when he was given wheat cakes he dipped them in the black writing ink to eat. The stories speak powerfully of how much effort Wang Xizhi poured into his work.
Several rumors exist regarding the whereabouts of Wang’s writings. Some say Tai Zong of the Tang, who is the founding emperor of the dynasty, held Wang’s writings so dearly that he ordered that every work of the legendary calligrapher be put into his tomb. Others say the Empress Wu Zetian, the only woman in Chinese history to become empress, coveted Wang’s masterpieces and buried them with her in the tomb. We’ll never know if that is really why none of Wang Xizhi’s writings are left. The worth of a masterpiece shines when it has the author’s genuine passion and soul. Wang’s present-day followers admired his authorship so much that they restored his work that perished in the nuclear disaster.
Korean society has seen numerous lies including the forgery of academic records and political strife full of vilification and plotting. The artistic achievement of Wang’s writings stands in stark contrast for its integrity and true dedication.