One stop guide to skiing and snowboarding this season

One stop guide to skiing and snowboarding this season 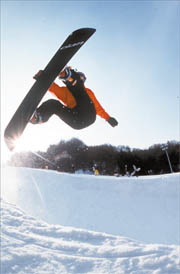 The slopes have just opened and resorts are offering competitive packages. [JoongAng Ilbo]

Blow that dust off your goggles and pack up your snowboard. The piste is waiting as Korea’s ski resorts throw open their doors for the new season.
Slopes across the country were already packed last weekend with snowboarders and skiers. Every year more people are taking up the sports, according to data from the Korea Ski Resort Business Association.
Over 5.6 million people visited Korea’s ski resorts during the 2005-6 season, but the number rose to over 6 million the following year. And during the 2005-6 season, 3.4 million skied the Gangwon runs, while nearly four million visited the same province during the next season.
There are 14 ski resorts in operation in Korea, and three under construction.
High 1 and Oak Valley, which opened only last year, saw 390,000 and 290,000 skiers, respectively, in the 2006-7 season.
Competition is growing and ski resorts are aggressive in their marketing, offering discounts and promos to draw in customers. Promotional events include discounts through deals with credit card companies.
Here are some of the special events offered by some of the major ski resorts in Korea. 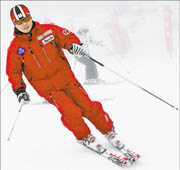 Oak Valley
Targeting the growing number of female snowboarders, Oak Valley is introducing a snowboard festival for woman starting Saturday. The same event will be repeated on Dec. 15, 21 and Jan. 6.
The female snowboarding team “White Betty Ride” will perform stunts during the festival and run free two-hour-long snowboarding and skiing lessons.
The festival includes a cosmetics gift set and discounts of up to 50 percent for accommodation at the resort and for the lift ticket. For more information, visit www.loopers.co.kr.
The highlight for Christmas Eve will be a special concert by an as yet unnamed Korean pop singer, followed by fireworks.
On New Year’s Eve, there’ll be more fireworks and another concert. The Oak Valley ski instructors are promising to glide down the ski slope, torches in hand, to mark the countdown to the new year.
Before dawn, there’ll be a balloon event with skiers tying messages of goodwill to the balloons and floating them up to the heavens.
For more information, call (033) 730-2873 or visit the resort’s Web site at www.oakvalley.co.kr. 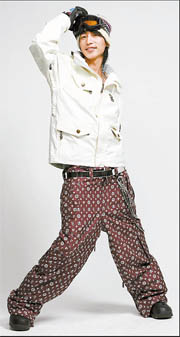 Phoenix Park
For the first 30 people who apply, Phoenix Park, one of Korea’s most popular ski resorts, is offering a free lesson on Dec. 26, Jan. 22, Feb. 19, and March 11 with Park Hyeon-sang, who designed the resort’s extreme courses.
There’ll be a concert on Christmas Day in the evening and on New Year’s Eve, and 100 ski instructors will hit the slopes holding torches before a fireworks show.
There is a snowboarding competition on Jan. 24 plus a special event in the first week of March where visitors can ski down the slopes in fancy dress.
For more information, visit www.pp.co.kr. 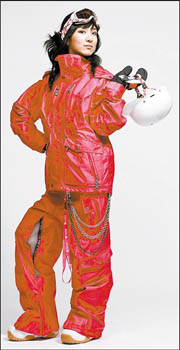 High 1
Starting Saturday, High 1 is operating a train once a day from Seoul Station to Gohan Station, and back again. The Busan to Gohan train will operate only during the weekend, and on New Year’s Eve, New Year’s Day and the Lunar New Year.
If you pay with a Samsung or Lotte credit card, you get a 20 percent discount on the ski lifts. If you use a Hyundai card, you get a 40 percent discount, but only in the mornings. It’s a 15 percent discount for the rest of the day.
High 1 is also presenting a special opening concert this Saturday featuring Wonder Girls, No Brain and Baby Vox.
The film “Mr. Magorium’s Wonder Emporium” will be shown on Dec. 15 in the resort’s conference room. Concerts and fireworks will be held on Dec. 21.
For more information, log onto www.high1.co.kr.

Yongpyong Resort
This resort offers the musicals “Grease” and “Jekyll and Hyde” on Dec. 14 plus a Christmas dinner buffet on Christmas Eve. The pop singer Lee Moon-sae will give concerts on the last two days of the year.
There will be fireworks and torch skiing down the mountains on New Year’s Eve and New Year’s Day. On Jan. 14, the cast of the 2002 KBS hit television drama “Winter Sonata” will hold a special concert. The program was filmed at the resort, making a superstar of actor Bae Yong-joon.
There are two discount packages: “Sweet Winter” and “Good Morning.” Sweet Winter kicked off last week and runs through March 2. For 174,000 won ($187), you get a one-night stay at the Tower Condo or the hotel’s deluxe room plus two daytime rides on the ski lift. This adds up to a 52 percent discount.
The Good Morning package costs 126,000 won and includes a one-night stay at a 59-square meter condo and a morning buffet. This makes for a 54 percent discount. When you make a reservation for either package, you get a coupon worth 30 percent off lift rides and the sauna.
The resort is planning another package for the end of next month called “Family Ski Camp,” which will include a one-night stay at either the hotel’s deluxe room or the Tower Condo plus two daytime lift rides, two daytime ski or snowboard rentals, two free restaurant coupons for two people, and a beginner’s ski lesson with insurance.
For more information, visit www.yongpyong.com.


Slim look’s in, hip hop’s out


Snow boarding and skiing aren’t just about shooting down snow-covered peaks as fast as you can.
They’re also about fashion, and this season the buzzword for winter fashionistas at the ski resorts is “slim.”
According to Lee Sang-hoon, who works for Board Korea, which sells snowboards and related accessories such as goggles and snowboarding attire, snow gear has become slimmer.
“Like in the previous years, this year hip-hop outerwear is out,” Lee said.
“There’s a larger demand for a slimmer clothes because the outfits can be worn just like ordinary clothes out of season. Previous designs were too bulky to wear off the slopes,” he said.
The biggest change in the snowboarding world this year is the bindings.
“This season the bindings follow an EST system,” Lee said.
EST bindings adjust more freely on the deck of the board.
“It used to be difficult to adjust the bindings to the individual rider,” Lee said.
“But now they are looser, allowing the rider more freedom to get into a more comfortable position,” he said.