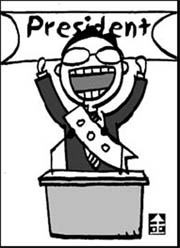 Ronald Reagan of the Republican Party won a landslide victory in the 1980 presidential election against Democrat Jimmy Carter, who had the advantage of being the incumbent president.
Carter promoted moral values as his campaign slogan but ended up getting 41 percent of the popular vote and 49 votes in the Electoral College.
Reagan, a former movie star, carried 50.8 percent of the popular vote and 489 votes in the Electoral College.
During the election Reagan targeted the promises Carter made four years previously regarding the unemployment rate, tax reductions and a balanced budget. The best target of all was the promise of three percent unemployment.
Reagan said in television commercials that more than a million people lost their jobs during the Carter administration and the unemployment rate reached eight percent. Then he asked whether people felt their lives were better than four years ago, which had tremendous appeal for voters.
It was also the economy that brought down George H. W. Bush when he ran for a second term in 1992.
Bill Clinton was a relatively obscure candidate from Arkansas compared to Bush, but Clinton was able to make great headway with the simple phrase ― “It’s the economy, stupid.”
A third candidate, Ross Perot, also hammered Bush with slogans such as “Jobs, debt and chaos in Washington.”
In Asia, the idea that food is heaven to people has long been the number one rule for staying in power.
Therefore, poverty and corruption were the red flags that signalled the collapse of an absolute monarch. Japan saw the end of the 40-year rule of the Liberal Party in 1994 due to long recession and continued bribery issues in politics. Thereafter in Japanese politics, many prime ministers were short-lived.
All the candidates in the 17th Korean presidential election promote slogans of success, trust, happiness and change. Each promises to be the “economy president.” Some promise to create millions of jobs. However, these rosy promises are yet to be realized.
It is unknown if they can be realized in the turbulent tide of globalization. Due to a stronger Korean won, the gross national product per capita of Korea is near $20,000. Yet the happiness index of Koreans ranked 108th out of 178 countries worldwide.
Gregg Easterbrook says in his book, “Paradox of Progress,” that for contemporary people, success and happiness are like a rainbow over the mountain.
*The writer is a deputy political news editor of the JoongAng Ilbo