Everyone wants a thick slice of game pie

Everyone wants a thick slice of game pie 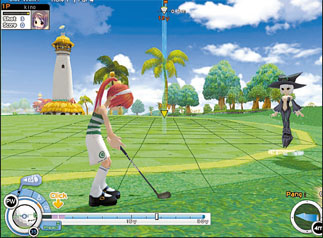 Cho Sin, executive of Internet business at SK Telecom, goes on the Internet the moment he enters his office in the morning to check on the popularity of online games.
He studies the content and characteristics of games that are top-listed, then decides which direction SK Telecom games should go.
SK Telecom has earned 100 billion won ($108 million) a year through its mobile game serviced to SK Telecom subscribers.
“Although game sales only make up a small portion of SK Telecom’s entire sales, it is one of the fastest growing areas,” Cho said. “Because of that the company is planning to increase its investment in games.”
Like SK Telecom, other conglomerates are jumping into the game market aggressively.
These conglomerates are pushing forward with their game business strategies with their top executives in command ― a sure sign of the importance they put on the game business.
Lee Ki-tae is Samsung Electronics’ vice president and chief technical officer. He is also in charge of the game business at the company’s digital solution center.
Under Lee’s direction the company in the last two years has distributed “Dungeon and Fighter,” an online game.
It helped the company earn 100 billion won. In September, the company distributed the online game “Red Stone” to the world market. It was previously offered only in the United States and Japan.

Although the game is currently offered for free, the company is planning to switch to paid service.
“With gaming being a service industry where Samsung gets to meet future customers, we are putting importance on this area,” Lee said.
SK Telecom has been expanding its participation in the game industry. The company spent 100 billion won to buy Ntreev Soft, the company that developed the popular golf game “Pangya.”
KT is also jumping on the bandwagon, investing in game funds and producing its own games through its subsidiary, Paran.
“The game market has become larger than the movie or music market,” said Cho of SK Telecom.
“Gaming is the next generation business which SK Telecom will be servicing through its telecommunication network,” he said.
Kwon Kang-hyun, an executive of Samsung Electronics’ digital solution center, said, “The younger generation, who are the future customers, play a lot of games.
“Through games we can understand the daily life of the younger generation and market products to them.”
Samsung Electronics is marketing mobile phones or MP3 players that can utilize games.
Additionally the company recently began developing Internet Protocol TV.
KT also plans on using gaming as a major content once IPTV service is provided. As conglomerates advance into the industry, the share for small and midsize game companies and distributors is shrinking.
CJ Group, in taking over the game portal Web site Netmarble, has established a game company, CJ Internet, which is seeing annual sales of over 100 billion won.
“Big companies are already promoting a reasonable amount of games even in the early stage of development,” said Kim Nam-ju, chief executive of Webzen, a game developer.
Estimates suggest that the Korean gaming industry is currently worth approximately 8 trillion won, and it is showing 15 to 20 percent growth every year. The global game market is estimated at $90 billion, with Microsoft and Sony as dominant players.