Peering into the human mind through the lens of a camera

Peering into the human mind through the lens of a camera 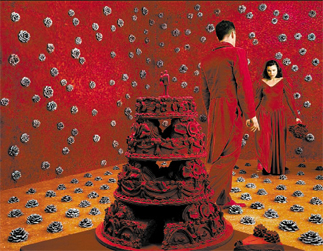 The art of American Sandy Skoglund is a playful kaleidoscope of humor and fear about psychic conditions. Her works are tempting but nauseating; beautiful, but unsettling.
In her photograph “The Wedding,” Skoglund created an installation in which a bride and groom behind a giant wedding cake try to walk across a sticky floor that’s coated with dried orange marmalade.
The walls are covered with strawberry jam as an amusing metaphor of the impossible sweetness we use to sugarcoat marriage.
As in most of Skoglund’s photographs, The Wedding is staged in a boxed room.
The piece is excessively scarlet; the veil, walls, clothing and wedding cake are vivid shades of red.
Skoglund often photographs the installation and then presents the photographs as the complete work, rather than exhibiting the installation itself.
Her odd photographs present a surreal spectacle of a person’s inner vision.
In her current exhibition at Gallery Kong, Skoglund presents a number of photographs and objects that were used in installations, like bronze casts of leaves and a plastic mold of a puppy.
Many of Skoglund’s works are simultaneously pleasing and repulsive.
She uses powerful imagery and colors that evoke an emotional response from her viewers. They are magical, surreal, tactile and often more beautiful than they appear, because their alluring vagueness distracts the viewer from thinking objectively. 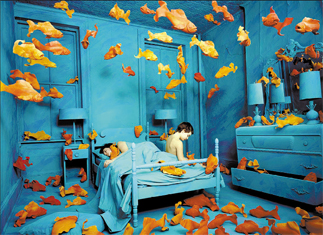 “Revenge of the Goldfish.” Provided by Gallery Kong

But she also takes subjects to the point where they become sickening. She covers a model’s body with bacon and hamburger meat; in “Raining Popcorn,” she decorates an entire room with popcorn; she fills a bedroom with swimming fish in “Revenge of the Goldfish.”
It’s hard to gauge the psychic effects of her images on viewers, but Skoglund has surely had an immense influence on younger generations of contemporary Korean photographers.
And even without the debate on the creation of art and other complex layers contained within Skoglund’s works, her photographs at very least offer an amusing glimpse into the complexities of the human imagination.


The Sandy Skoglund exhibition runs through Feb. 3. For more information, call (02) 738-7776. To get to Gallery Kong, get off at Anguk subway station, line No. 3, exit 1, and then walk for about 15 minutes toward the Blue House.