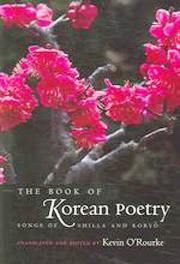 Bandits set upon a Silla monk who’s heading for Mount Jiri where he plans to spend the rest of his life in contemplation. The monk faces down the highwaymen without fear, and even compliments them on their swordsmanship. They recognize him as a well-known songster and make a request. When he sings “Ujok Ka (Meeting with Bandits),” they are so moved that they renounce their life of crime and become monks themselves.
This is just one of the stories that accompany the poems in “The Book of Korean Poetry: Songs of Shilla and Koryo,” newly translated and annotated by Kevin O’Rourke.
The volume contains only 153 poems in its 90 pages, but the economy of language is such that readers can take their time over a single composition.
O’Rourke’s annotations provide a frame of reference that clarifies what could be obscure for some readers.
The earliest poems come from the Three Kingdoms period (18 BC to 668 AD), and the latest chronicle the fall of Goryo (935 to 1392) and the rise of Joseon. As the title suggests, the bulk of the poetry stems from the Silla and Goryo dynasties.
Allusions to nature run throughout the poems. More than one of the poets is a government official who leaves behind the worries of court and seeks refuge in the mountains. One is Choe Chi-won (857- ?) who uses mountain streams to drown out the voices of arguing officials in “Written in Study on Kaya San”:
Water rushes madly between the bundled rocks; the mountain seems to roar.
Even at close range human voices are indistinct.
The constant dread of wrangling in my ears
made me ring the mountain with flowing streams.
In “Presented to the Head Monk of Golden Stream Temple,” Choe pays tribute to the abbot of a well-known temple:
You built on the banks of White Cloud Stream;
for thirty years you have been head monk.
With a smile you point to the single road that passes the gate.
At the bottom of the mountain it becomes a thousand tracks!
Anyone who has spent an afternoon on a mountain knows the mind-clearing power of fresh air, sunshine, grass, clouds and sky. The effect will be even stronger for a monk who has spent 30 years meditating on such a mountain.
The singular focus he attains on the peak stands in stark contrast to the world below, pulling us in a thousand different directions.
Both these poems belong to the hanshi tradition, Korean poems written using Chinese characters. Hanshi poems, O’Rourke writes, are meant to be contemplated.
Another genre, Koryo kayo, grew out of an oral tradition. These poems were not written down until King Sejong developed the Korean alphabet in the 15th century. O’Rourke writes that they are “love songs for the most part, earthy, lovely, sexy as only folk songs can be.”
In one such poem, “Chongup Sa,” a woman worries that her lover is enjoying another woman’s company at the market place. She pleads with him to drop what he is doing and come home. In keeping with the oral tradition, the nonsense lines give the poem a song-like quality.
Moon,
rise high, rise high in the sky,
shine, shine, far and wide.
O-gi-ya o-gang-jo-ri
i-gi-ya ta-rong-di-ri.
Is my man in the marketplace?
I fear he’s mired in a sticky space.
O-gi-ya o-gang-jo-ri.
Unburden yourself of all your gear!
Nought but night awaits me here.
O-gi-ya o-gang-jo-ri
i-gi-ya ta-rong-di-ri.
Inspiration for other poems in the book come from the click of baduk chips (used in Korean checkers), a rose blooming in winter and “a thousand mountain peaks at the rim of the sky.”
O’Rourke is a highly respected translator of Korean literature, and this book provides spiritual nourishment wrapped in a history lesson.
It is available at the library of The Korea Foundation Cultural Center, (02) 3789-5604, in central Seoul.