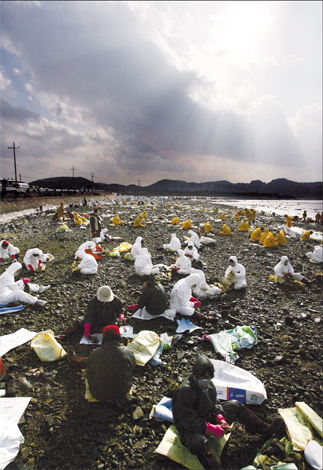 TAEAN, South Chungcheong ― I’m crouched on an oil-soaked mudflat, scrubbing pebbles with a felt cloth. The biting wind whips around me, piercing my clothing.
The cleanup operation is intensive and repetitive. Pick up a blackened rock, clean it as best you can, replace it, pick another. The work’s sending me into a trance-like state, and I’m in Taean, a state of disaster.
It’s a grim scene. Along the shoreline are gathered thousands of masked men and women zipped up in protective clothing, their boots sinking into the slime. They look like spacemen from a sci-fi B-movie.
I pause for a rest and think about the mudcrabs, octopuses and other creatures that inhabited the area until recently, until the black filth turned these mudflats into a toxic swamp. If I poke deeper into the thick slabs of mud, the black oil seeps out into foul-smelling pools.
We still have a long day ahead of us in Sindu-ri, a village in Taean County, South Chungcheong. The coastline here is considered one of the most precious ecological sites along Korea’s west sea. It shelters rare plants and threatened wildlife species such as golden frogs and leopard lizards. The Sindu-ri sand dunes have been designated a national treasure and the marshes and wetlands nearby are important ecosystems. 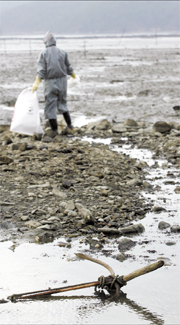 A man surveys the devastated mudflats. Photos by Jeong Chi-ho

But the deadly oil spill that struck the Yellow Sea last week has contaminated the entire area. It happened when a Korean barge slammed into a Hong Kong-registered oil tanker carrying 260,000 tons of crude oil, about 1.8 million barrels, and leaked 10,500 tons into the sea.
It’s Korea’s worst oil spill. At least 30 beaches have been ruined.
This is the first weekend since the accident, and nearly 100,000 volunteers have reported for duty along the shores, mudflats and port areas, according to an official at Taean County.
All along the beach at Sindu-ri were huge sacks packed with oysters that had been smothered in foul black crude. On one side of the mudflat, volunteers were scooping up the shells with plastic buckets.
Last week, I signed on as a volunteer for a cleanup operation arranged by the Korea Federation for Environmental Movement, the largest of the local environmental groups. The federation expected about 1,000 volunteers when they posted an ad calling for help on Monday afternoon.
By Thursday, more than 2,000 had applied.
When we left for Taean last Saturday morning from Sajik Park in northern Seoul, the army of volunteers had swelled to almost 2,700. Fifteen chartered buses were needed to transport us. 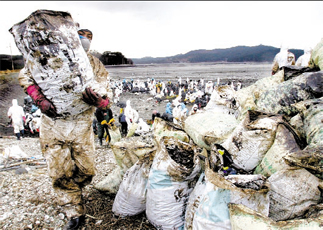 For some volunteers, the mop-up was a chance to make a difference.
“I want to do something meaningful other than just doing my schoolwork,” says Kim Hyun-jin, a 17-year old, who took the national college entrance exam last month. “I’m really excited about getting involved in the cleanup effort.”
When we arrived at the site, we were assigned duties and divided into small teams. My job was to scrub oil off pebbles.
For hours, we sat on small mats, making sure we didn’t miss a single stone.
But the enormity of the task threatened to overwhelm us. There was oil everywhere and countless pebbles and stones. Even if we cleaned them all, the incoming tide would deposit a fresh layer of sludge.
Until the sea was completely cleaned up, our efforts seemed in vain.
“But it’s still worth doing what we do,” says a federation activist. “Even if we’re only helping a little, it’s worth it for the long term.”
On the bus ride to the site, we were told about the health hazards involved and were given filter masks to keep harmful airborne substances out of our lungs.
A team of doctors was on hand, we were told.
The fumes from the slick were bearable by the time we got to the mudflat. But we were the lucky ones. Other volunteers had been less fortunate. Days after the accident, many arrived to start the massive cleanup job without masks and breathed in toxic particles.
As we worked, the cold was hard to endure. There was coffee and tea in an outdoor tent for volunteers taking a break. But by early afternoon, exhausted middle-aged workers had already gathered in small groups around the parking lot across from the beach, gulping down soju to warm themselves.
Many agree that the early stages of the cleanup operation had not been well-organized. Choi Ye-Yong, a planning director for the Citizen’s Institute for Environmental Studies, admits that the wildlife rescue operation in particular had been hasty. 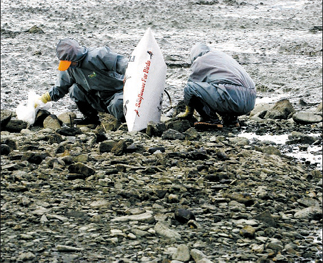 Choi was one of the first environmental experts to reach Sindu-ri. A day after the spill, Choi visited the site with a team of experts. They found a great crested grebe, a local winter bird. It was sitting in front of a sand dune, its feathers drenched in oil.
By the time it was found, it already showed serious signs of hypothermia, the main cause of death for animals caught in oil.
The team kept watch over the grebe for an hour, powerless to save it. “It was a very painful scene to witness,” Choi recalls. “At first, we thought it was dead, because it wasn’t moving. When we stepped closer, the bird jerked its head. It was completely covered in oil. All you could see were its red eyes blinking at us.”
They left the grebe, believing it could not be saved, but later Kim Sin-hwan, a veterinarian on the scene, said the bird could have survived.
On his second day, Choi found two murrelets, small seabirds common to the area, along the shores of Maripo, the hardest-hit beach. They were in a worse condition than the grebe they found near Sindu-ri.
This time, he placed the two birds in a cardboard box and took them to his clinic in Seosan. He brushed the oil off their feathers with a mix of light detergent and cooking oil, and rinsed them in lukewarm water.
After a few days in intensive care, the birds recovered. Later last week one of them was released.
“It breaks my heart to think about the bird we left behind that day,” Choi says. “But when we came back the next day, it was no longer there.”
The cleanup operation in Taean faced other barriers over the weekend. Frustrated by the slow response after his visit to Taean on Tuesday, President Roh Moo-hyun called in the Navy. Ships sprayed emulsifying agents over the grim slick in an effort to contain the impact.
But it was too late. These emulsifiers should have been used in the early stages of the oil spill when the oil was concentrated.
“It was a rushed decision,” says Zi Tzan Hyuk, the coordinator at the head office of the nature and ecosystem department in the Korea Federation for Environmental Movement, the local civic group. “By midweek, the oil had spread out and the chemicals made the oil sink, causing a much bigger mess along the shores and greatly damaging marine wildlife.”
Taean is already showing signs of ecological breakdown. Oyster farms are saturated with oil and dead shellfish have been swept to shore.
“Before the accident, we saw seagulls and ducks whirling around the rocks and oyster farms on this sea,” says Yeon Heung-eun, a Sindu-ri resident who owns an oyster farm. “Now, they’re gone. They know the oil means death for them.”
On our bus ride home, Choi expresses his concern for the villagers in the months to come.

Twelve years ago, he saw how the lives of seafarmers and fishermen were ruined when the Korean tanker Sea Prince struck a reef, releasing over 5,000 tons of oil into the sea off Yeosu in the south of Korea. The Taean oil spill is two times greater than the Sea Prince incident.
“By next week, the number of volunteers will decrease and the media will concentrate on the presidential election,” Choi says. “Then in a few weeks, the oil spill on Taean will be forgotten. The villagers will be the only ones to continue fighting. It will be a long and difficult fight.”