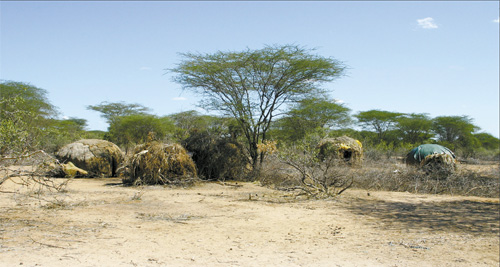 KENYA ― A sturdy-looking land cruiser speeds across the plains of Kenya, leaving a cloud of dust in its path.
I’m travelling with Choi In-hyuk and local volunteer Gilbert from “Team and Team,” a Korean missionary organization.
It’s a 15-hour drive from the capital Nairobi to Garisa, the driver’s destination. There, the truck’s occupants will inspect the local wells.
Choi is a water expert on a mission to help, one well at a time.
A year spent traveling around Africa and Asia changed Choi’s life. His journey taught him that there are people in the world today who regard a glass of water a day as a gift.
From that point, Choi knew his destiny: to be a well-digger.
He studied in the earth system sciences department at Yonsei University and then majored in subterranean water at the university’s graduate school.
His year abroad made him realize the value of his studies and after finishing his military service, Choi threw himself into his career.
“I’ve revived or dug 51 wells in the Garisa and Turkana regions since I got to Kenya in November 2006. Those wells provide water for 120,000 villagers,” he said.
“For the sake of protecting the environment, I try to revive old wells rather than sink new ones. Whether it’s changing rusty pipes, rubber packing or cylinders, most wells can be revived fairly easily. For those wells which haven’t been used for a long time, we pump up the water with a compressor and sterilize it using chlorine,” he said. 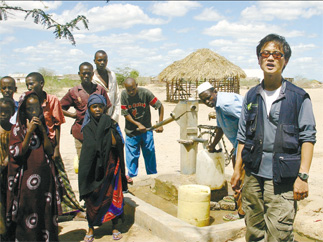 After one and a half hours of bumping along the dirt tracks, we reached a small village named Bura, a cluster of straw huts with grass roofs.
It was midday and the village was quiet, except for one place ― the village well. Children were lined up holding buckets, waiting their turn to draw cool water from the pump’s spout.
Choi revived this well in Bura last June. He changed the rubber packing and other spare parts.
“It’s usually the job of the women and children to collect water from the well. But if there’s no water in the wells, they have to walk all the way to the Tana River,” he said.
They say the average Kenyan walks 12 kilometers (7.5 miles) to get water, Choi said.
About 20 minutes out of Bura, we ran across the Tana River. Streams of muddy red water run into it. Children playing nearby looked up as they saw strangers coming their way.
“There are terrible accidents from time to time. Crocodiles are everywhere and they can sometimes attack the kids playing near the river’s edge,” Choi said.
Recently, a 16-year-old girl was collecting water from the Tana River when she was attacked.
“The villagers later caught the crocodile using a goat as bait. They found the dead girl’s body inside the crocodile’s stomach, everything except for one arm,” Choi said.
Even after such a tragedy, children continue to get water from these rivers. There’s often no alternative. While one child gets water, another throws rocks to distract the crocodiles.
Three-fourths of the Earth’s surface is water. If we add up all the water in the oceans, rivers, lakes and ice packs in the Arctic and Antarctic, the planet has 133,000 cubic kilometers of water.
What’s more, the human body is 70 percent water, and for animals and plants that number can rise to 70 to 95 percent.
Simply put, water is life.
According to a recent survey by the United Nations Environment Programme, three million people die every year from lack of water or from water-related diseases.
A majority are children under five.
Choi said a leading cause of the droughts in Africa, and global climate change in general, is overindustrialization in the developed world, and their activities have led to ecological dominance over the poor.
“The floods, snowstorms and hurricanes around the globe are ultimately the outcome of leading countries neglecting the environment throughout the years that they built their economies,” Choi said.
“They’ve focused only on economic development. The amount of oil used in the United States, Europe and China is overwhelmingly more than in other parts of the world. This accounts for global warming, which then results in rises in sea level and air temperature and also changes in ocean currents,” he said.
Korea is part of the problem, according to Choi. Korea ranks sixth in oil usage, 10th in energy use and ninth in greenhouse gas emissions.
Korea must shoulder some of the responsibility, too, Choi said, and take action.
“The long-standing drought in Africa at present is due to climate change. Warm currents are no longer warm and cool currents are no longer cool,” he said.
“Irresponsible energy use in rich countries is affecting the lives of Africans. This is why developed countries should stand up and try to do something to help as quickly as possible,” he added.
After passing though several villages and checking the condition of the wells, we headed back to Nairobi. The setting sun cast a deep orange glow over the dusty landscape of the great plains of Africa.
Then, with a loud pop, our truck lost its steering and started to swerve across the road. The cabin filled with the reek of burning rubber. One of the rear tires had blown.
A major accident had been averted, but the dangers that volunteers like Choi and Gilbert face daily suddenly became very real.