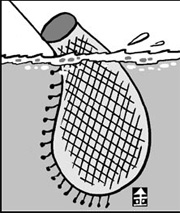 At Gyeongbok Palace on Aug. 11, 1418 by the lunar calendar, King Sejong, the father of the Korean alphabet, who had ascended to the throne the previous day, published a crisp instruction letter eulogizing the still-living previous two kings: “After King Taejo established the Joseon Dynasty, dear Father King Taejong succeeded to the throne successfully. Taejong honored the will of heaven by loving his subjects.”
The rather overwrought eulogy to the achievements of Taejo and Taejong during the previous two decades contains a Chinese maxim that a net should be opened with the main string. The letter then ends with an order pardoning all criminals, except those who committed extremely serious crimes, such as treason, rebellion or patricide.
The art of the net, which King Sejong recognized as an art of governing, is indeed a maxim frequently employed by the past rulers and political thinkers of Asia. To elaborate, a net consists of a main string, from which other smaller strings are connected.
To properly open a net, the main string should be picked up so that other smaller or larger holes will open accordingly. The maxim provides advice as to what steps should be taken and in what order, and that priorities ought to be distinguished.
It is said that Yeo Bul-wi, the man known to have fathered the first emperor of China, was the first to mention the art of the net as the art of statesmanship. Yet the official history says that Ban Go of the Han Dynasty was the first to write that once the main string of a net is properly opened, then all the other strings open accordingly.
The knowledge to tell heads from tails, what is important and what is not, and what is urgent and what is trivial is imperative for a statesman more than anything else. “Dae-hak,” or “The Book of Great Scholarship,” underlines the significance of such knowledge many times.
A new president has been elected. I mention the art of net and the art of knowing priorities at this point because the past five years have been quite frustrating. The priorities in the economy and government have frequently been confused during the past five years, not to mention the backward-looking policies under the title of “reform,” which inhibited the forward progress of Korea.
New leaders must be able to tell the heavy from the light and the urgent from the moderate, so that rightful efforts can be taken in their direction. Retarded approaches emphasizing only parochial and sentimental emotions should be ended lest Korea lag behind once again in this era of intense global competition.
The writer is a deputy international news editor of the JoongAng Ilbo.