Men who never outgrow their gadgets

Men who never outgrow their gadgets 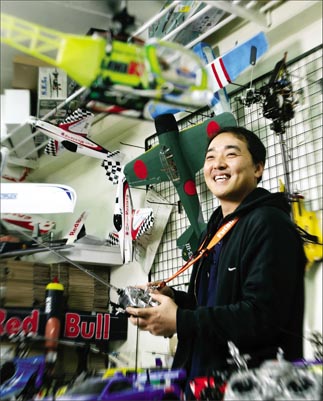 Yoo Hong-joon is happiest in his RC den surrounded by his remote-control gadgets. After closing down the family textile business, he has turned his hobby into a business by importing RC paraphernalia from China. By Jeong Chi-ho

The miniature helicopter made a deafening whir as it slowly took off. The blades rotated at speed until they were just a blur, filling the room with a powerful blast of air.
Yoo Hong-joon, 32, was busy fiddling with a chunky sliver control panel, trying to keep the helicopter balanced. It didn’t look easy. In fact, it looked as though it would take some time to master.
“It’s pretty hard to keep the machine under control in midair without it tipping over,” Yoo said.
“It used to take a first-timer at least six months just to lift a helicopter off the ground,” Yoo said.
“But many RC products today use batteries instead of gasoline engines, so people have had more time to practice, making it easier to master the controls,” he said.
Yoo imports remote control toys such as helicopters, cars, boats and airplanes. RC toys, as they’re known, are usually considered kids’ playthings, but the number of men taking up RC as a hobby is increasing for two reasons, according to Yoo.
“Thanks to the increased number of cheap models manufactured in China, RC toys, especially cars, have become more affordable,” Yoo said.
Still, they’re not that cheap when compared with the products you can pull off the shelves at Toys ‘R’ Us.
“In the past it was much harder to get RC toys, especially those that ran on a gasoline engine,” Yoo said. “People had to earn at least 50 million won ($53,000) a year to own one in the 1980s and 1990s,” Yoo said.
“Most people nowadays start off with a cheap RC toy that retails for between 800,000 won and 1.2 million won, but eventually move up to models that cost between 2 and 4 million won,” Yoo added.

Another contributing factor, Yoo noted, was the five-day workweek the Korean government introduced in 2004.
“The five-day workweek means men have more time to play with RC toys on Saturdays, and then they can spend all Sunday with their families,” he said.
Next to Yoo’s office, “Remote Control,” in Siheung, Gyeonggi, where we were playing with the RC helicopter, there was another room stacked with different types of RC machines ― planes, jets, cars and more helicopters.
With the various RC playthings, computers, PlayStation consoles and joysticks, grease used for lubricating the different moving parts of the disassembled RCs, screwdrivers and so forth, this was a dream room for a certain kind of guy.
“This is where several guys from an RC community of about 30 people spend their entire Saturday,” Yoo said.
The men work on their RC toys, swap stories and generally indulge themselves. If they want to fly their planes, they need to go to designated areas. The planes are heavy and can cause injuries if they hit passersby.
RC users head out on weekends to Gyeonggi, such as Hwaseong, near Suwon; near the W Hotel in Guri and to Gwangmyeong.
In Seoul, there’s a designated RC flying spot in Amsang-dong, northern Seoul.
Lee Sung-whan, 30, one of Yoo’s clients, is now a close friend as well.
“I first owned an RC helicopter in the fall of 2006,” Lee said. “I’d seen people playing with RC gadgets ever since I was in elementary school, but as you know, it wasn’t easy to own one back then.”
He got the opportunity to purchase one when, aimlessly surfing the Internet, he found RC stuff for sale online. He bought the cheapest helicopter available.
“It was much harder than I expected,” said Lee, even though he’d majored in engineering in college, and the expense was a worry.
Even so, he became more ambitious as he got more involved in his hobby.
“I couldn’t fulfill my satisfaction simply with cheap helicopters,” Lee said. “Soon I was upgrading.”
Lee said he spends more than a million won a year on equipment and, like other RC addicts, he spends his Saturdays either assembling his gadgets or flying them at a nearby range.
“I love assembling RC toys,” he said. “You need to take your time, be precise and take extra care. When your work turns out better than you expected, the feeling of satisfaction is priceless.”
Getting your RC toy airborne or on track also makes all the effort worthwhile.
“When I’m at work, I sometimes find myself thinking about my RC gear and I can’t wait to get home,” Lee said. “There are times when I stay up all night putting my creations together until my eyes turn red.”
Lee likes to be around people with a similar passion. “Here at the RC community you get to meet all sorts of people working in different fields,” said Lee, who works for a semiconductor manufacturing company.
Since this is a hobby that needs daylight ― flying at night is not recommended ― people in the RC community tend to go home early.

“They don’t drink much either, so this is a healthy activity, although it’s expensive.”
Yoo’s first experience with RC toys was when he was in sixth grade.
“My father used to work for a foreign clothing trading company and he used to travel abroad a lot, and one day he brought me back an RC car from Japan,” Yoo recalled.
That was in the late 1980s, when RC toys were scarce.
“There were only four kids including myself who had an RC car in our school and we used to play in the playgrounds,” Yoo said.
Yoo said he moved from motor toys to girls as he got older. It wasn’t until 2003 that he picked up the RC remote once more.
After graduating from college in Korea, Yoo spent six years in Sri Lanka at his father’s clothing factory learning the family business.
Growing Chinese competition meant business was not booming, so the young entrepreneur closed shop and came back to Korea in search of a job in 2003.
“Then one day I was surfing the Internet and found cheap RC helicopters for sale,” Yoo said. “It brought back many memories so I bought one for myself.”
The young importer said his hobby became a job when a Chinese friend suggested that Yoo try importing RC toys from China. “I did some market research in China and it was clear that RC toys were going to be a growing market,” Yoo said.
He came back to Korea and started to sell RC gadgets online. “Business is going well,” Yoo said.
And he gets to keep up his hobby and make money at the same time ― another dream come true.
But it’s not all fun and games. “My mom doesn’t take my job seriously,” Yoo said. “She asks me from time to time, ‘Do you make enough money?’” he added.
There’s also the question of romance. His hobby tends to interfere with his love life. It’s not easy trying to convince the opposite sex about the virtues of RC toys or the need for RC paraphernalia, Yoo said.
Things can get pretty serious. Yoo is sometimes called upon to cover for clients whose wives suspect their husbands are spending too much on their RC hobbies.
“I tell some of the wives that the parts for the RC toys cost 50,000 won when they probably cost a lot more,” Yoo said. “But they think that even that price is ridiculously expensive.”
Lee has a girlfriend and he plans to keep up his hobby as long as he can. But what if he gets married and his wife disapproves?
“Then I’ll just have to convince her that she can enjoy RC toys, too.”