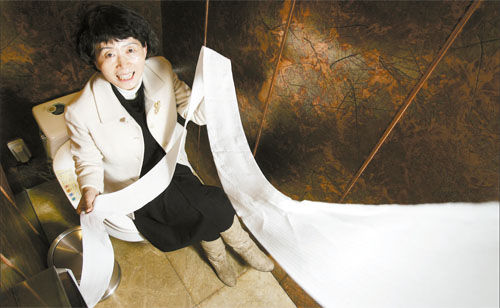 Pyo Hye-ryeong, founder of the Citizens’ Coalition for Restroom Culture, inspects the restroom facilities at Lotte Avenuel, an upmarket department store in Seoul. By Jeong Chi-ho

Stenciled ivy stretches out, gently wrapping around the painting of a marbled column on the wall. A flower pot sits on the floor. In a dimly lit lounge, an antique mirror rises to a graceful arch and an “etiquette bell” plays a soft violin concerto.
Are we in a luxury hotel suite? No, we’re in award-winning bathroom in Seoul as voted by Gangnam District Office in its recent “beautiful toilets” campaign.
The district office and the Korea Toilet Association asked a team of professors and toilet experts in November to select toilets in their district that met global standards.
The team collected 236 recommendations from owners and regular users. Entries included lavatories in public buildings, outdoor markets and commercial complexes. After much frank discussion and investigation, the experts eventually named 19 toilets as the area’s most beautiful, and the winner was a public loo in Hakdong Park.
The judges were unanimous. They praised the toilet’s sanitation, cultural sensitivity and facilities for the disabled. The park also had sanitary toilet covers, a makeup room and facilities for changing diapers. 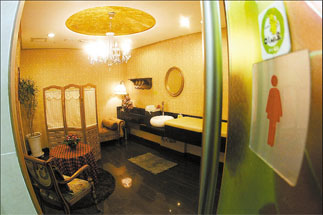 The Seoul city government chose the toilets at Freevi, a family restaurant near Seoul National University, as some of the most user-friendly in the capital. By Jeong Chi-ho

The Gangnam toilet movement is straining to be heard, and it’s making an impact. It’s not just a question of meeting the city’s cleanliness codes. It’s about innovation, artistry and philosophy.
“A toilet used to be a place just to do one’s business,” says Kim In-hye of Gangnam District Office. But the World Toilet Association, which was launched in Korea last month, is campaigning for toilets to be regarded as secure spaces for “health, rest and meditation.”
To support the association’s mission and upgrade the level of toilet culture in Seoul, the Gangnam District Office is planning to put in motion a toilet competition twice a year, Kim says.
In Seoul, shop owners and the PR staff of major department stores and restaurants are competing hard against each other to revamp their toilet facilities.
Innovations include plasma mirrors, touch-tone screens with advertisements, automatic soap dispensers and etiquette bells, handy devices that cover up embarrassing noises drifting out of the cubicles.
Top Cloud Grill and Cafe, a restaurant on the 33rd floor of Jongno Tower in central Seoul, asked well-known French designer Philippe Starck to create a stylish bathroom that overlooked the Seoul cityscape.
N Seoul Tower claimed its “Sky Toilet” was the highest point in Seoul to perform one’s ablutions when the building was redesigned in 2005.
Designers are not without a sense of humor. The gents in a parking lot for Baekun Valley in Pocheon, Gyeonggi, is built in the shape of a mushroom, a regional delicacy and a phallic symbol.
And the Gangneung city government built a bathroom in the shape of a spaceship. It has a glass ceiling, and at night, neon flashes on the metallic walls inside and a small dome on the top of the craft radiates mystical light. The city leaders even invented an accompanying legend that claims the spaceship landed in Gangneung because the aliens were captivated by the city’s alluring scenery.
But Korea’s toilet culture has not always been flush with such praise.
In 1999, the Seoul government surveyed overseas visitors about their stay in Korea. The top three complaints were problems concerning language, traffic and unpleasant conditions in public restrooms. 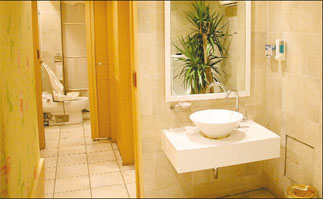 Woogak, a restaurant in southern Seoul, one of the “beautiful toilets” chosen by the Gangnam District Office,

The municipal government responded quickly and that same year launched the 5.5 billion won ($4.2 million) “Clean Toilet, Clean Seoul” campaign.
“There was not one public toilet in Seoul that met sanitation codes when we first began the movement,” says Pyo Hye-ryeong, the head of the Citizens’ Coalition for Restroom Culture, a civic group that first raised the idea for a toilet campaign.
“We made the slogan ‘A beautiful person leaves beauty,’ and pasted it on the city’s restrooms, begging users to be more conscientious when they use public facilities,” Pyo says.
The city’s toilet conditions underwent a revolutionary change before the World Cup games. Bidets, heated toilet seats and perfume dispensers became popular amenities across Seoul.
But the officials were pushing harder. They wanted to wipe the slate clean.
In 2004, Korea became the first country in the world to enact a Public Restroom Act, a law that tightened sanitary regulations and installed more women’s toilets.
Just last month, Sim Jae-duck, a Korean assemblyman, launched a general assembly of the World Toilet Association in Korea under the dynamic catchphrase, “Toilet Revolution, Changing the Future of Mankind.” In attendance were more than 1,500 government ministers, industry personnel and high-ranking officials in areas of health and hygiene from 78 countries.
“We have officially established the WTA, an organization which particularly focuses on toilet matters, a subject that makes many people uncomfortable when it’s discussed openly,” said Sim at a press conference during the WTA meeting.
“Everyone is entitled to be happy while using toilets. For the happiness of humankind, we need to help less-developed countries, make more effort to save humankind from suffering and reduce environmental damage,” he added.
In September, the Ministry of Government Administration and Home Affairs, in collaboration with the World Toilet Association, published a tourist guidebook that identifies 30 of the cleanest and most beautiful toilets in Korea.
Included is a toilet at a highway rest stop in Icheon, which won a local architecture award. 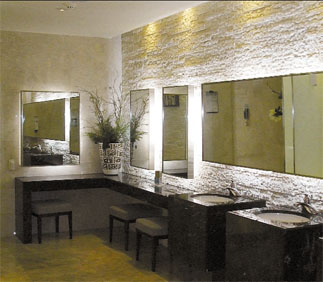 “Restrooms in Korea are deliberately designed as a multipurpose space,” says Kim Hyeong-sik, an official at the Korea Toilet Association. “As an industry, it has more potential than the shipping or automobile industries.”
Still, it’s not all roses.
Some fundamental problems remain, such as the odious conditions of toilets in some public parks and bus terminals.
On the Web site for the Citizen’s Coalition for Restroom Culture, Internet users have posted a string of complaints about public restrooms in Seoul.
One of them wrote: “When I went into a male restroom in Jongmyo Park, there were large holes in the partitions. I went back a month later, but they still hadn’t been filled in.”
Toilets for people with disabilities are another concern. “By law, all public toilets in Korea should have convenient facilities for the disabled,” says Hong Hyeon-geun, an official at the Korea Association for the Physically Disabled. But the laws are not consistent, so builders and property developers can ignore the rules.
“Toilet facilities for the disabled should have vertical handlebars for people who are paralyzed below the waist, but most toilets only have horizontal ones,” Hong says.
There’s a long way to go, but the recent toilet campaign means answering the call of nature, in some public buildings at least, is no longer such an ordeal.