The year of the Earth

The year of the Earth 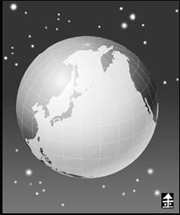 Some say this planet should not be called Earth, but Water. The oceans are 360 million km2 (95 million acre) wide, and account for two-thirds of the entire surface of the planet. The average depth of the ocean is about 3,800 meters (12,500 feet). Until very recently, people did not know a lot about the sea. The crew of the HMS Challenger, a British oceanic research ship, was surprised to learn, when they extended a rope in the Pacific Ocean on missions between 1872 and 1875 to calculate ocean depth, that the bottom of the sea was more than 8 kilometers from the surface.
This wide and deep sea is now facing multiple threats. The inland seas and gulfs, in particular, which are surrounded by lands are turning into dead seas without any oxygen due to severe levels of pollution. The Bohai Sea of China is one such dead zone.
Last month, Japanese Prime Minister Fukuda Yasuo suggested, in a talk with Chinese Premiere Wen Jiabao, establishing an environmental fund between Japan and China to save the Bohai Sea. Here in Korea, a massive oil leak in the sea on Dec. 7 occurred near Taean. In addition, a cargo ship fully loaded with nitrogen sank into the sea near Yeosu on Dec. 25.
The sky is wider and higher than the ocean. The troposphere, the lowest atmospheric layer of the Earth and the determinant of the weather, reaches 10 to 15 kilometers on average, although it expands or decreases based on the altitude and seasonal changes. On top of the troposphere lies the stratosphere. But to humans, that wide sky seems claustrophobic. That’s why they made a hole in the stratosphere, even though the decrease in the use of freon gas means it might be refilled within 50 years. Carbon dioxide has increased its occupancy from 0.028 percent to 0.038 percent of the Earth’s atmosphere over the last two centuries, enough to cause the greenhouse effect that is warming the world.
The year 2008 is the year of the planet Earth, as declared by the United Nations. The Village Earth, which witnessed the tsunami that hit Southeast Asia in December 2004, decided to memorialize this year for studies about the Earth to prevent natural disasters and tie scientists’ research to actual policies.
However much we study the Earth, though, we might not be able to maintain the health of the planet unless we curb human desires, which are higher than the sky and wider than the sea. Just as the UN Development Program warned in November, even nine planets Earth would not be able to harbor humankind if all 6.5 billion people consumed energy and emitted greenhouse gases like the people in developed countries.

The writer is a reporter of JoongAng Ilbo specializing in environmental issues.