In UIsan, eating illicit whale meat is no fish story

In UIsan, eating illicit whale meat is no fish story 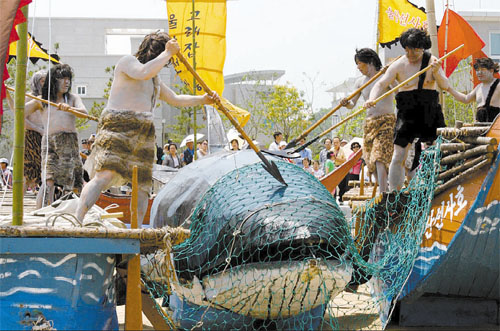 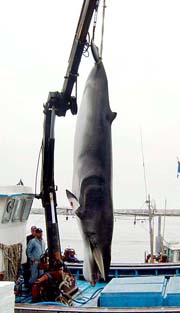 Fishermen bring in a minke whale that they say died in their fishing net. [JoongAng Ilbo]

ULSAN, North Gyeongsang ― Eating whale meat here can be an unsettling experience.
The International Whaling Commission banned commercial whaling worldwide in 1986. That means, according to law, restaurants in Ulsan are only allowed to serve whale meat that has been caught “by accident” in fishing nets or washed up on shore already dead.
But that doesn’t mean the restaurant owners here always stick to the law.
After all, Ulsan is known as Whale Meat City.
The heyday of whaling in Ulsan, 70 kilometers (43 miles) north of Busan, came in the 1970s and 1980s. Legend has it that even the local dogs running around town would carry a chunk of whale meat in their mouths.
Times have changed.
It’s an open secret among restaurant owners that environmental activists from Greenpeace send undercover investigators to Ulsan every year.
They come to check the origins of the pricey whale meat served in local diners.
A news report last week revealed that local police had raided two unlicensed warehouses in the city’s main port, Jangsaengpo. The cops found 60 tons of minke whale meat.

The case closed the town’s strip of seafood restaurants selling whale meat for more than 10 days.
To avoid illegal trading in whale meat, the authorities are making a last-ditch effort.
The Whale Research Center at the National Fisheries Research and Development Institute recently announced that it is offering a 10 million won ($10,670) reward for any sighting of a gray whale, dead or alive, in the area. The gray whale was last seen in the East Sea in 1964.
The same institute is also offering 5 million won to anyone with a photograph or videotape of a live gray whale in the sea.
The turmoil over whale meat, however, is not strong enough to overpower the appetite of culinary nerds.
Ulsan still attracts busloads of tourists on gourmet trips every year to taste a sample of Korean-style whale meat.
The city consumes 80 percent of the country’s total whale meat ― about 150 tons, according to the city’s annual report in 2005.
That is still small fry compared to Japan, the world’s biggest whale meat consumer ― 4,800 tons in 2005, according to the Japan Times.
But concern for endangered species aside, the taste of whale meat is unlike other seafood. It is one of the only mammals that has the texture of fish, but the flavor of meat. It’s a strangely well-matched combination. 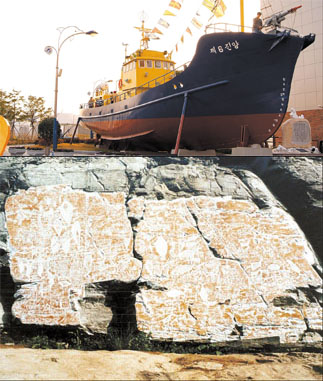 The whaler “Sixth Jinyang” was decommissioned in 1985, a year before commercial whaling was banned worldwide. The ship is now displayed in Jangsaengpo’s Whale Museum. Provided by the museum Whale meat at a deli in Ulsan. By Park Soo-mee

If you harbor no qualms about eating whales, Ulsan’s Jangsaengpo is the perfect place to sample it.
There’s only one condition: the cost.
An average plate of assorted whale meat costs around 30,000 won to 100,000 won in Ulsan. In upscale restaurants in Seoul you pay double that.
Whale meat is eaten either raw or cooked in Korea. It’s said here that no part is wasted except the bones and teeth.
It’s true. A typical plate of steamed assorted parts includes stomach, viscera, tail, skin and fin.
The most popular part is the viscera, or the guts. The smell can be overwhelming for first-timers, but veteran whale eaters like the chewy texture.
The locals’ favorite is obegi, steamed tail seasoned with salt. Just 20 years ago, a popular saying in Ulsan went, “You can’t call it a party without obegi on the table.”
The way to eat steamed whale meat is simple: Dip the meat in anchovy sauce and eat it with garlic and vegetables. If you are not an adventurous eater, locals suggest whale stew.
To promote the whaling history of Ulsan, the city government set up Jangsaengpo’s Whale Museum (052-226-2809). It’s just a block down from the whale meat joints.
One of the museum’s most vivid displays is the whaling deck, which was actually taken from the original site near the museum.
It was used as a counter to cut and distribute whale parts when the catch was brought to shore.
Next to it is a giant tank for the oil extracted from the whale. The oil was used to make perfume, cosmetics and margarine.
There are many exhibits, including the skeleton of a 12.4 meter long Bryde’s whale, donated by the Whale Research Institute in Japan.
The museum also houses an interesting collection of research documents and whaling-related records.

One of the most fascinating items in the archives is a thesis on gray whales by Roy Chapman Andrews.
This American naturalist is supposedly the inspiration for the movie character Indiana Jones.
Andrews came to Ulsan in 1912 for extensive research on whales. His writings reveal that mother gray whales found in the local sea contained a rare gelatin in their stomachs.
Gelatin comes from seaweed and is produced after the cows give birth. It’s an intriguing fact ― it could be connected to the Korean tradition of feeding seaweed soup to women after they have given birth.
Whaling in Ulsan dates back 3,000 years. At Bangudae, an archeological site designated as one of Korea’s national treasures, there is a stone carving of a whaling vessel used to hunt sperm whales and killer whales.
The hunters used spears to secure their prey.
Nearby, another rock carving depicts bones from around 5000 to 1500 B.C.E., indicating that whales were a major food source for locals in ancient times.
In a recently published book about Korean lighthouses, “Lighthouse: From the Colonial Light to Modern Landscape,” Korean ethnographer Joo Gang-hyeon includes a quote from the keeper of Ulgi Lighthouse in Ulsan.
The lighthouse keeper said he used to see “a school of whales breaching the surface of the sea” when he climbed up to turn the light on every evening.
That was just a few decades ago.
There hasn’t been a recent sighting, but you never know.
Even if you don’t see the whales, Ulgi Lighthouse, located near the city’s Bangeojin port, oversees a spectacular view of exotic rocks, a pine forest and the East Sea.
The lighthouse was built by the Japanese Navy in 1906, the year after it destroyed the Russian fleet during the Russo-Japanese War.
Once the lighthouse was built, shipping in the area expanded, fueling the city’s whaling business.
Ulsan is still noted for its scenic coastline. It hasn’t been marred by excessive commercialization and tourism like at other beaches dotted around the Korean shoreline.
Ganjeolgot, a beach on the edge of the city, draws a modest crowd on New Year’s Day. It’s where you can see the first sunrise in Korea.
In 2008, the sun rose here at exactly 7:31:26 a.m., 54 seconds before it rose in the village of Homigot in Pohang, which neighbors Ulsan. 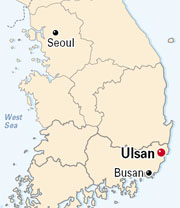 Near the ocean’s edge, there is a giant postbox. Visitors use it to mail letters of hope to people they miss. About 4,600 letters were collected from the box last Christmas.
The Ulsan city government holds an annual whale festival over the summer to promote whale tourism.
The city slogan is “Whales Dream Ulsan.”

Eating
For whale meat, check out Wonjo Gorae Matjip (052-261-5060), or The Original Whale Deli, which charges 30,000 won ($32). The better known whale meat restaurant is Gorae Halmaejip (052-265-9558), or Whale Grannie’s House. The menu includes whale stew.
A cheaper option is to buy whale meat in Joongang Market in central Ulsan, but be ready to compromise on sanitation.

Overnight
Probably the best bargain in the city for an overnight stay is a free pension house at Ulgi Lighthouse. You can make reservations by calling (052) 251-2125.
Mauna Ocean Resort, about half an hour from Ulsan City center by car offers a posh golf resort for around 100,000 won a night.
For a convenient stay in downtown Ulsan, check out Lotte Hotel, which offers seasonal discount packages.

Tours
Call (052) 271-6633 or visit www.ulsancitytour.com for more about tours of the area, including trips into the Hyundai Industrial Complex, a major employer in the region.