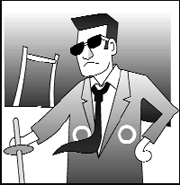 It is a common view that the word yakuza, which means gangster in Japanese, originated in the gambling world.
The term comes from a card game in which the person who wins has the highest last digit from the sum of two or three single-digit numbers chosen randomly. It is similar to the Western trump game “blackjack.” If you pick an 8 and a 9, the sum will be 17. The last digit is a 7. Normally people would not choose another card in that situation. However, when the inclination to gamble stands in front of reasonable thinking, you might pick again and get a 3, leaving you with the worst result, a last digit of 0. Such unreasonable thinking and behavior resembles the lives of the yakuza. Reading the numbers 8, 9 and 3 consecutively became the word yakuza. In short, it means a “very useless person.”
Some people say the yakuza world was formed by people who weren’t able to fit into mainstream society. That is the same reasoning as to why there are so many Italians and Chinese in the American Mafia.
About 30 percent of the Yamaguchigumi, the largest yakuza organization in Japan, are from the buraku class, the lowest class in the Edo period. These people, who were unable to finish school due to financial reasons or could not find a job, gathered together seeking to hold absolute power.
What the yakuza hate most is having their pride and prestige damaged. That is why they are so noted for strict rules and regulations within the gang. From light punishments such as disciplinary confinement and tonsure, there are higher levels of punishment, including dismissal from membership, expulsion or having a finger cut off.
Recently, the yakuza has been battling hard to survive. As society has cleaned up, they have had less chances to collect black money.
This is why there are mergers and acquisitions among the yakuza groups, something unimaginable in the past. They are also very good at enticing otherwise reasonable organizational managers and IT minds to the groups.
In addition, to become a leader of the yakuza within a group, it’s most important to have management ability, quick decision-making skills and global business competence, not the ability to fight well.
Though there are still rumors that the yakuza was involved in the lynching of singer Na Hun-a, even within their group, the conventional easygoing lifestyle of the yakuza seems no longer in effect.
If that trend prevails, a lazy employee might be scolded as being more useless than a yakuza by supervisors in the workplace.