[Talk of the town]Stork brings baby No. 3 to actors Two celebrity lovebirds have added another chick to their nest.

[Talk of the town]Stork brings baby No. 3 to actors Two celebrity lovebirds have added another chick to their nest. 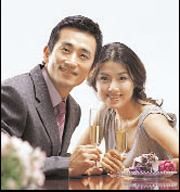 
Married actors Cha In-pyo, 41, and actress Shin Ae-ra, 39, adopted a 3-month-old girl as their third child. The couple has named the baby girl Cha Ye-jin.
“Through adoption, a child learns love and so does her new family,” Shin said.
The couple was inspired to adopt Ye-jin while volunteering at the Social Welfare Society, a government-funded organization. Cha and Shin are regular volunteers.
Ye-jin is the couple’s second adopted child. In 2005, Cha and Shin adopted a baby girl and named her Ye-eun. She is now four years old.
Shin also has a biological son, Jung-min, 11.

Hollywood gobbles up movie audiences in Korea
Korea could use a little movie magic these days. Only one out of every 10 Korean films netted profits last year, according to a Korean Film Council report released Monday.
The report, titled “2007 Korean Film Industry Settlement,” showed that of the 112 films released last year, only 13 (11.6 percent) surpassed the break-even point.
Only three of the 10 top-grossing films in Korea were of domestic origin ―“D-War,” “May 18” and “200 Pounds Beauty.”
Instead, Hollywood films appeared to dominate. Top-ranking films included “Transformers,” “Pirates of the Caribbean: At World’s End” and “Spider-Man 3.” 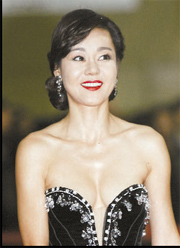 ‘Lost’ actress finds stardom in the U.S. Kim Yun-jin embodies happiness these days.
Best known for her role as Sun-hwa Kwon on the American television drama series “Lost,” Kim was the center of one American newspaper’s spotlight in a recent interview.
An interview with Kim made the front page of national newspaper USA Today. Titled “Back to the island for ‘Lost,’ ” the interview provided an in-depth look at Kim, who will resume her role in season four on ABC’s Lost.