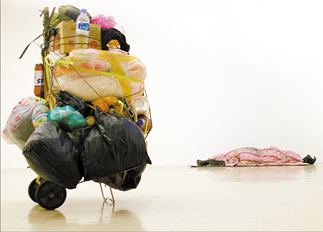 Wild recreated a cart that homeless people use to carry their belongings in the gallery.

Albrecht Wild heaved a sigh of relief when pedestrians outside his studio in western Seoul last week were thrown into panic and called an ambulance. They had found a body covered by a blanket lying in the street.
Earlier that day Wild had wrapped the body in blankets and deposited it in his neighborhood as part of a study on homelessness in Seoul.
The fact that his studio is located in a quiet residential area probably accounted for the crowd’s reaction to finding the “corpse.”
Wild filmed the entire episode on his camcorder as part of a public performance, but the show ended in less than half an hour.
“The situation got really complicated near the end,” says Wild, a German artist who has been in Seoul since November as part of an exchange program hosted by Frankfurt Am Main.
Wild finished a show last week on homeless Koreans and their contemporary urban reality. It was held at Changdong Art Studio Gallery, a studio run by the National Museum of Contemporary Art.
“The people tried calling an ambulance, screaming that the man was dying on the street. It was very interesting. You won’t see that in Jongno,” Wild say.
Even in an art gallery, the blanketed body creates a chilling presence in its dark corner. It’s laid on a flattened cardboard box next to some soju bottles and scattered black plastic bags. A boot sticks out from a mass of blankets.
In the gallery, Wild has installed authentic-looking cardboard dwellings and junk-filled shopping carts that homeless people use to carry their possessions. Similar sights can be seen at railway stations around the capital, especially Seoul Station.

In the far corner, he made a figure of a body covered by a blanket. Provided by the artist

“I am not being cynical,” Wild says, “but I wanted to visualize as an artist. I am not a sculptor. I am not interested in being a sculptor. I just want people to realize the content of my work.”
Wild has photographed sites for the homeless across the nation during his three-month stay in Korea. He hung these shots on gallery walls during an exhibition, conveying the way the homeless arrange their carts and fold their signs that bear requests for cash.
He has also collected phrases from the homeless and made them into business cards, which he has passed to citizens in Seoul. He presented the cards in separate plastic cases on the gallery pedestal. He named the exhibition “I didn’t expect this to happen to me,” an actual phrase written on a sign used by a street man whom Wild met in Seoul.
“The way they presented their messages of help in Korea was so different from other places,” Wild says. “In Germany, you find homeless people saying, ‘I am hungry. I need food.’ In Korea, the messages are more indirect. I thought there was something very Asian about that.”
Wild is not the first artist to do an art project on the homeless.
Krzysztof Wodiczko, an activist artist, designed special vehicles that the homeless can use as personal shelters or storage to transport belongings. The project was meant to provide the homeless with a means of transportation other than shopping carts so they wouldn’t be seen as cart-stealers.
“paraSITE” was a project initiated by Brooklyn-based artist Michael Rakowitz aimed at using exterior heat-exhaust ducts in public buildings to give the homeless temporary shelter. The project involved inflatable air balloons with multiple windows to keep a person warm inside during the winter. By connecting the tip of the balloon to the ventilation ducts, the people living on the streets could sleep with hot air circulating around them.
Wild, however, positions his works rather differently from activist-oriented artists. He finds greater meaning in art while he works around a fictional idea.
An earlier project called “Boat People” makes reference to urban nomads on a mass exodus and contemporary refugees who live without homes through the use of mannequins designed as boat people. The project was presented at Fluid Art Canal 2006, an exhibition on a canal in Daejeon,
“We know it. We read about it, and we see it, but we don’t really look or care,” Wild says. “I want to take the issue to another level so people start to look at it differently.”
In fact, part of an installation from his latest exhibition, which ended on Jan. 25, is doing exactly that.
The blanketed figure from the show will find a new home at the Goethe Institute of Seoul.
Juergen Keil, the institute’s director, has offered to display the artist’s work before the artist returns to Germany at the end of the museum’s residency.
“I think it will frighten some people,” Keil says. “But it’s an appropriate place for the kind of art Wild is doing.”
The figure will be installed at a quiet corner behind the staircase of the institute’s cafeteria.
“It’s a perfect corner to sleep,” Keil adds. “It’s also a sign for us to provide some accommodation for the homeless. I can’t say it’s an exhibition, but it will stay there for a while.”
Perhaps that’s good enough for the homeless figure ― for now.


Albrecht Wild’s works will be on display the Goethe Institute of Seoul from this week. For more information call (02) 754-9831.