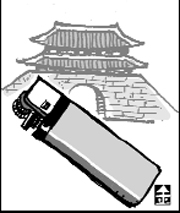 Herostratus is the most famous arsonist in history. In 356 B.C., he burned the Temple of Artemis, one of the Seven Wonders of the Ancient World. The temple was located in Ephesus, a Greek colony by the Aegean Sea in what is now western Turkey. Construction started in the middle of the sixth century B.C. and took 120 years to complete. It had 127 white marble columns, each 20 meters (65.6 feet) high. The magnificent structure, described to be 110 by 55 meters in dimension, was more than twice the size of the Parthenon.
The arsonist was caught shortly after his crime, and before being put to death for blasphemy he was asked why he had burned the temple. His motivation, he said, was to gain immortal fame. Thus it was ordered that his name never be recorded or mentioned. Nevertheless, his wish came true; we know his name even today, some 2,200 years later.
Nero, the emperor of Rome from A.D. 54 to 68 had long been mistakenly known for going mad and ordering the torching of Rome. The Great Fire of Rome started on the night of July 18, A.D. 64. It started in shops by the Coliseum and spread to the palace and residences, continuing for nine days and engulfing the entire city. While the city was being rebuilt later, a splendid palace was put up on the site of the fire, and rumor spread that Nero was responsible for it. To diffuse suspicion, Nero held Christians responsible for the fire, ordering them brutally executed. Later, Europe became Christianized and the name Nero became a synonym for tyranny due to this persecution and the murders of his mother and his wife.
For a long period, Nero was believed to have burned Rome. But these days, the argument that people who had grudges with the empire’s state of affairs and believed in doomsday set the fire, either by accident or on purpose, gains more credibility. The historian Tacitus wrote years later in the book “The Great Fire of Rome” that Nero was at his villa in Antium, 80 kilometers from the city, when the blaze took place. According to the book, Nero rushed to Rome and did his best to put it out and aid the victims.
Korea is about to see its most notorious arsonist in history, a man named Chae, 69, who allegedly set fire to Sungnyemun, National Treasure No. 1. Reportedly he committed the crime because he was unsatisfied with the compensation money he received for his land on which new apartment buildings are to be built. It is truly tragic that the national treasure is gone, and also that he is in such a deranged state of mind.
Nothing has been gained except notoriety that will probably be remembered for a long time to come.