[Review]Take a hippie trip with The Beatles

[Review]Take a hippie trip with The Beatles 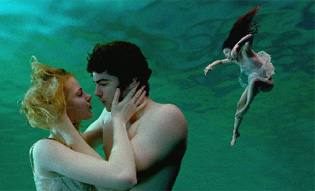 Lucy (Evan Rachel Wood), left, and Jude (Jim Sturgess), with Prudence (T.V. Carpio float in the psychedelic world of “Across the Universe.”[Revolution Studios]

On a barren beach sits a lonely figure singing the opening lines of The Beatles’ song “Girl.” The forlorn man stares down the lens of the camera and asks, “Is there anybody going to listen to my story?”
The funny thing is, after finishing the film, I am still not quite sure exactly what that story is.
Director Julie Taymor’s film “Across the Universe” is an exploration of love, war, a time period, youth and, of course, a band.
But to truly appreciate this movie, you have to make allowances. You have to let it lead you down its long and winding road.
Set in the 1960s, we are immediately introduced to the main characters, their era and their countries. Jude (Jim Sturgess) is a Liverpudlian shipbuilder who leaves his girlfriend, mother and job to find a father he has never met in America.
While searching for his father at Princeton, he befriends the irrepressible Max (Joe Anderson) and his beautiful sister Lucy (Evan Rachel Wood). The three end up going to New York City where they live in a sort of bohemian enclave in an apartment owned by sultry singer Sadie (Dana Fuchs).
The film is able to capture ’60s life, music and counterculture really well through repeated references, allusions and actual historical events.
Events like the Columbia University riots and the Vietnam War, as well as performers like Jimi Hendrix, who comes to life in the film through the character of Jojo (Martin Luther McCoy), give this film a sense of nostalgia and place.
Yet the film manages to steer clear of becoming a boring epic drama as it keeps on surprising and enthralling. It has a habit of drawing you deeper into its world. And what a world!
The Beatles’ catalogue of songs punctuate the plot. Fantastic covers of some of history’s most famous songs splash more color into the movie. The heart-wrenching cover of “Let It Be,” sung by a small black boy hiding behind a car as the Detroit riots explode in the background, provides one of the more poignant moments.
The visual beauty and psychedelic style that suffuse the film also give it a certain individuality. The dream-like hippie trip you experience when the characters ride the bus of acid guru Dr. Robert (Bono) brings this style to the fore.
The use of music and quirky cinematography at times verges on seeming forced. But just as you catch yourself worrying, the film endears itself to you again.
There are a number of strong performances by the almost unknown cast. Although not John Lennon or Paul McCartney, the voices are good. Small but special cameos by Bono, Eddie Izzard, Salma Hayek and Joe Cocker capture the sense that this film just keeps giving you more the whole way through. Maybe it’s just hard to not like Beatles music, so let it be.