Korean acupuncture on needles and pins

Korean acupuncture on needles and pins

Interest from the West may revive legitimate acupuncture therapy in South Korea.

Last month, a middle-aged self-styled shaman, whose last name is Kim, was arrested by police for selling unlicensed medical supplies and giving fake acupuncture treatments to some 200 patients. She claimed that her skills with the needles were a gift from the heavens.
Since early last year, the 47-year-old shaman has been operating an unlicensed acupuncture clinic at a Buddhist temple in Mokdong, western Seoul. She is suspected by police of collecting about 500 million won ($529,000) in fees for her heavenly therapies and the sale of bogus medical supplies to desperate patients with serious illnesses.
It wasn’t her first arrest.
In 2004, Kim was fined for practicing acupuncture without a license. A year later her face was on a wanted poster distributed by police after she gave fake medical treatments in Seoul.
But when she happened to “cure” a Buddhist priest early last year, she decided to open an unlicensed medical clinic, Seoul police said. Not surprisingly, Kim’s patients later saw many unwanted side effects.
A patient who visited her from Gangwon Province was blinded after receiving 30 treatments from Kim’s needles. A glaucoma patient who visited the fake physician lost his sight entirely.
Kim Nam-soo, an elderly licensed acupuncturist, sighs when he hears such news. He laments the fact that the government no longer licenses new acupuncture practitioners, and he says trouble with fakes and charlatans could be avoided if the law would allow real acupuncturists to set up shop. At 93, Kim Nam-soo is one of about 50 licensed acupuncturists left in Korea.
“Acupuncture and moxibustion [heating the acupuncture needles with mugwort herb, or moxa] were Korea’s traditional medicine for thousands of years,” Kim said. “But sadly today, acupuncture and moxibustion are disregarded in favor of Western treatments.”
Medical reforms enacted in 1962 under the rule of President Park Chung Hee abolished a law regulating acupuncture and moxibustion as a medical treatment. The government also abolished the licensing of traditional bonesetters. Other forms of Oriental medicine were allowed to continue, along with Western practices.
As a result of the reforms, the remaining licensed acupuncturists here are all over 70 years old, having received their credentials before 1962.
At that time, about 5,000 students were training to become acupuncturists but in the end they couldn’t acquire a certificate and had to find another profession. The 11 existing acupuncture and moxibustion institutes run by the government in those days were closed down.
Though he is still licensed, Kim says that Western and Oriental medical doctors often sue him for practicing illegal medicine. They see acupuncture and moxibustion, which are common throughout Asia, as banned practices.
Kim is heartbroken by the decline of acupuncture, which he believes is beneficial, safe and trustworthy for many ailments.
“If applied correctly, acupuncture and moxibustion are free of side-effects,” Kim said.
“They are easy and cheap medical treatments that are good for people. But Korean people today depend only on Western and herbal medicine for their medical treatment.”
Though Kim acknowledges that modern science is important and that it has brought great contributions to human health, he also believes science has contributed to the growing number of diseases. An antidote, he says, can be found in traditional practices.
And gradually, he notes, Western countries have shown an interest in acupuncture as an alternative form of therapy with many applications, while in Korea, the practice is dying out or considered to be on the borders of legality.
Even the World Health Organization has officially listed some 300 diseases and disorders that can be treated by acupuncture and moxibustion.
In a curious cultural reversal, interest from the West has led to a revival of calls to bring back the acupuncture tradition. But there has been little progress toward changing the 1960s-era reforms, largely due to opposition from Western and Oriental doctors and the Ministry of Health and Welfare.
Meanwhile, acupuncture is legal in China and North Korea, as well as in the United States and many other countries, including Australia, Mexico, Panama, Brazil and Argentina. European governments, including France, England and Austria, also allow its use by doctors.
With the practice in the shadows here, however, patients desiring the treatment can often be hoodwinked by unscrupulous shamans and frauds. 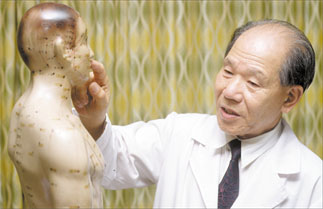 Kim Nam-soo, 93, one of a fast-declining number of licensed Korean acupuncturists, points out the energy paths on the body suitable for the traditional treatment. [JoongAng Ilbo]

“Without the revival of strict and legal acupuncture and moxibustion, problems involving fake acupuncturists and negative side effects will continue,” Kim said.
To help publicize his cause, Kim established Tmsarang a nonprofit organization that voluntarily ― and legally ― offers acupuncture and moxibustion treatment.
Tm in Korean means moxibustion and sarang is love. The organization promotes the “betterment of national welfare and human health,” Kim says.
Because the treatment is free, it does not violate the law, Kim says. Through Tmsarang, anyone can learn about acupuncture through courses the group offers. There are learning centers in major cities, including Seoul, Busan, Daegu and Gwangju. The organization has its own internal qualifying examination for trained individuals.
Currently, there are some 1,000 members of Tmsarang who give volunteer treatments. The group has also visited Ulan Bator in Mongolia to treat patients and traveled as far as Zambia to give free acupuncture therapy to AIDS patients.
“Acupuncture is a medical technique that helps the body heal itself naturally by stimulating the 12 key areas on the body suitable for acupuncture,” Kim said. The 12 spots are the pathways for the body’s energy, according to Kim.
Niels Footman, a British journalist who has been living in Korea for more than six years, was at first skeptical about acupuncture until he inflamed the tendons in his right elbow through weight training.
He found his way to acupuncture when he became frustrated over his condition. He first received cortisone shots for the inflammation and then underwent an operation. As a student at the time, his insurance didn’t cover the operation and subsequent treatment. He wasn’t able to afford all the post-operation visits to the doctor.
“The operation didn’t seem to work very well and I was becoming depressed at the notion of never being able to do weight training again,” Footman said. 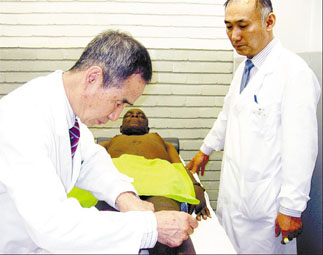 “I knew that acupuncture was becoming accepted in the West and I was willing to give it a try,” he said.
He went to an acupuncturist near his home in central Seoul. “I tried acupuncture combined with pads that shoot minor electrical impulses into your arm, along with an herb remedy,” he said.
“It worked like a dream,” Footman said of his encounter with the needles. Within weeks, his elbow was better than ever; in a couple of months he was back in the gym.
“Better still, it was cheap - something like 10,000 won per session,” he recalls.
Last year, he inflamed the tendons in his left elbow, also through weight training. This time, he tried acupuncture before anything else. “Though I would never claim that acupuncture is a cure-all, it certainly worked for me,” Footman said.
Karen Wiley, a Candain student, said in an email interview that she received acupuncture when she was a student-athletes in the United States at the University of Miami from a licensed therapist who came to campus to treat athletes.
When she injured her back at a fitness club, she was in agony, with a herniated disc and severe muscle strain. Several treatments provided no relief until her athletic trainer referred her to an acupuncturist.
“I didn’t know very much about it and I was skeptical about its effectiveness,” Wiley said.
She knew it involved the use of needles to relieve muscle strain, but it seemed unlikely to be effective since it sounded so simplistic. She was treated twice a week just to see what would happen. 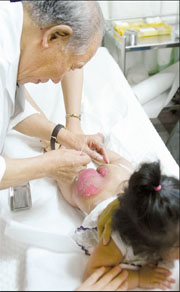 Dr. Kim treats a burn patient in Seoul. Provided by the organization

“I felt immediate relief after my first appointment,” she said. “I subsequently felt better with each treatment.” The therapist treated several points on her back and other places on her body that the ancient energy paths indicate are connected to the back.
It was a blessing for her, and one that old Dr. Kim hopes can be restored to its proper place of honor in the Korean medical lexicon.
Because even the most sophisticated societies are learning to benefit from the ancient healing art, Kim is confident that the practice he has devoted a lifetime to can be revived here.
In order to hold on to the tradition, Kim’s oldest son and daughter are also busy learning the family trade. His daughter is currently attending an acupuncture school in the United States.
For anyone who doubts his intentions, Kim’s reply is simple: “What self-interest could a man in his 90s have? I just hope that Koreans won’t have to go abroad any longer just to learn our own traditional medical art.”