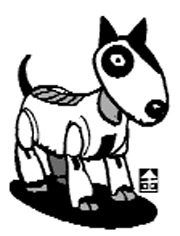 Dogs have lived among humans for millennia. In the ruins of northern Israel, the remains of a man estimated to be 12,000 years old were discovered with the left hand resting on the skull of a 4-to 5-month old puppy. All over the world among ancient human ruins, we find the remains of dogs.
Among the 4,000 species of mammals and 10,000 species of birds, humans have only been successful in taming about 10.
The most successful was the dog. Dogs drive livestock, find hunting prey, pull sleighs, search for survivors and guard homes.
Nowadays they play a big role as pets, because as a friend and family member dogs show unswerving loyalty and love.
Nonetheless, a challenger to the dog has suddenly surfaced: robots.
Research has proven that in relieving the loneliness of old people, real dogs and robot dogs are nearly equally effective.
These findings by researchers at Saint Louis University in St. Louis, Missouri were published in the latest Journal of the American Medical Directors Association.
They had a real pooch called Sparky and a Sony robotic dog named AIBO play with 38 nursing home residents for eight weeks.
It took the old folks a week longer to warm up to AIBO than Sparky, but in the end they came to pet and talk to both dogs equally.
According to survey results, the people felt about the same level of emotional bonding and relief from loneliness with each type of dog.
AIBO is the first robotic dog that emulates a real dog’s behavior. Sony began to sell it in 1999 at $2,000 apiece, recording 11,000 units in total sales. The company stopped producing it in 2006.
But there are rumors that a new model with the ability to identify its owner will be on the market soon. If artificial intelligence continues to develop at this rate, robot dogs will be able to do the same things as real dogs. Further, there will no misunderstandings, hypocrisy or betrayals, only loyalty.
Still, if you can buy these qualities any time you want, then it can’t be the real thing.
One of the best playwrights of the 20th century, Eugene O’Neill, wrote about the pain of watching his pet dog’s death in an essay titled “The Last Will and Testament of an Extremely Distinguished Dog.” The dog’s will says, “There is nothing of value I have to bequeath except my love and my faith ... Whenever you visit my grave, say to yourselves ... ‘Here lies one who loved us and whom we loved.’ No matter how deep my sleep I shall hear you.”

by By Cho Hyun-wook [poemlove@joongang.co.kr]