King Coal is back

King Coal is back 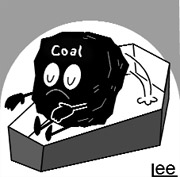 A small city in Hokkaido, Japan is famous as the backdrop for a film, “The Yellow Handkerchief.” In reality, Yubari, the name of the city, has come to denote major misfortune. Due to a mountain of debt that amounts to over 25 million won per citizen, the city declared bankruptcy. Because the city had tightened its belt, hospitals had to abolish discounts for seniors. Bus fares, water charges and auto taxes were raised, making it harder for the people to live. Yubari was a city that had flourished until the late 1980s through coal mining. Coal miners from around the nation flocked to the city, and many businesses flourished.
However misfortune came with the closing of the mines in 1990. Due to alternative energy and rising labor costs, it was impossible to maintain the mines. The population was once up to about 130,000, but now only one-tenth remains.
Although there are differences in degree, similar collapses have happened in mining areas around the world. In the Ruhr region of Germany, where Korean workers were once recruited to work in the coal industry, the number of mines have dwindled to eight from a high of 277. The percentage of coal in world energy consumption has decreased to 24 percent in 2000 from 62 percent in 1950. It seems that King Coal met its end in the late 20th century.
However a peculiar thing is happening. Large mining companies like BHP Billiton and Anglo-American have started to look for new mines. A recent focus of interest is the Tabantongoi mine in Mongolia, which was left undeveloped due to insufficient infrastructure. The news is that China, Japan, the United States and Russia are all now locked in a contest to win development rights for this mine.
Coal, whose price rose over 75 percent in just a year, has now become a precious commodity, quite a turnaround from what was recently cheap and easy to find. The largest reason is China, which has become a black hole absorbing all the resources it can from around the world. Although China has sent a rocketship into space and is developing high-speed railways, it still relies on coal for 70 percent of its energy. The record-high oil prices, unstable world economy and coal shortage are sparking a coal renaissance.
Add coal to the list of resources nations will battle over. The Ministry of Foreign Affairs and Trade is putting a department wholly in charge of energy diplomacy. They have now opened their eyes to resource diplomacy. Well, it’s better late than never, though the world is already in the midst of a resource war.
The writer is a deputy political editor of the JoongAng Ilbo.