The treasures of legendary John Huston

The treasures of legendary John Huston 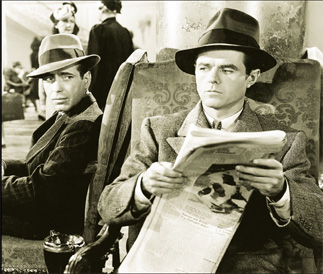 A scene from Huston’s “The Maltese Falcon.”

Films these days are often saturated with computer graphics and complex fight sequences.
These movies are great for weekend viewing when you want strong visuals and plenty of thrills.
But if you want sharp dialogue and more original storylines, the black-and-white classics are often a better option.
If this resonates, you are in for a treat. The Seoul Art Cinema in Jongno, central Seoul, is hosting the first ever retrospective in Korea of the work of master filmmaker John Huston.
Starting Saturday and running through April 10, the festival commemorates the director’s contribution to the film industry with screenings of 15 of his classic movies.
Huston’s work is not well known in Korea, yet he is well regarded among his peers. His movies have been up for countless prizes, including 15 Oscars. He won the best director and best writing adapted screenplay Academy Awards in 1949 for “The Treasure of the Sierra Madre.”
According to The New York Times, this movie inspired Paul Thomas Anderson when he was making his recent film, “There Will Be Blood.”
Born in Nevada in 1906, the son of actor Walter Huston, the director made his stage debut when he was 3.
During his life he worked as a boxer, an actor, a screenwriter and a painter in Paris, as well as a director. He died in 1987.
As a screenwriter, Houston struck gold. He was one of the four writers who wrote “Jezebel,” which was directed by William Wyler in 1938, and he wrote “High Sierra” in 1941 and “Sergeant York” in 1941.
That same year, Houston made a successful debut as a director. He released “The Maltese Falcon,” starring Humphrey Bogart, a classic film noir that effectively launched the genre. He went on to direct Bogart again in The Treasure of the Sierra Madre and “Key Largo.”
The retrospective in Jongno will feature “Moulin Rouge” ― not the recent musical version starring Nicole Kidman and Ewan McGregor ― “Moby Dick,” “The Unforgiven,” “The Misfits” and “Casino Royale” ― not the latest in the 007 series.
One of the films in the festival is “Fat City,” which was filmed in 1972 and was based on Huston’s experience as a boxer.
For more information, call (02) 741-9782 or visit the Web site at www.cinematheque.seoul.kr.