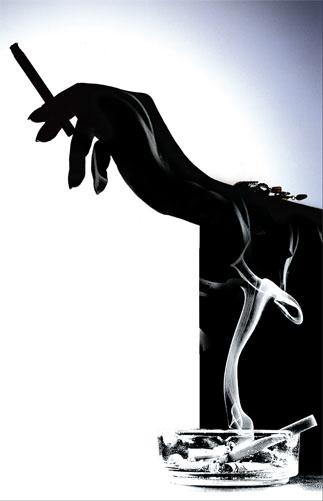 Despite the dangers, an estimated 100 billion cigarettes are smoked each year in South Korea, making this country a goldmine for tobacco companies.
To maintain, or fight for a greater market share, tobacco companies need to advertise and promote their products.
Domestic laws restrict them from TV advertising, so companies resort to other tactics. What many try to do is court chains, mom-and-pop stores and other businesses associated with young people ― a huge potential market ― with strategies that civic groups say are unethical and at times illegal.?
“Everyone wants a flagship store for their product,” says an industry source speaking on condition of anonymity. “So what companies do is target certain areas of a city where they can aggressively market their product.”
Just as clothing manufacturers establish their flagship stores at strategic locations in wealthy areas such as Gangnam in southern Seoul, tobacco companies target convenience stores near colleges and clubs where young people congregate.
Cigarette companies pay the owners of stores and clubs to place their brand or product in an eye-catching spot. That’s why you see posters hanging from the ceiling and products placed prominently on the cashier’s counter, according to the source. The more prominent the product is displayed, the higher the premium the store owners get.
“We call it a ‘listing fee,’ and it can go up to a few million won on a monthly or yearly basis.” Currently the law states that cigarette manufacturers, importers and wholesalers are prohibited from giving money to businesses that are licensed to sell cigarettes.?
Another approach favored by the tobacco companies is to sponsor parties or clubs by paying them directly or indirectly to let them take their products inside. “When I want to hold a party, I contact a tobacco or liquor company. They pick up all the expenses for organizing the party in exchange for advertising their products,” says Hong, 35, who spoke on condition only his last name will be used. “The best time for us is the end of the year around Christmas time.”
An official in charge of daily operations of one of the hottest night clubs in the Gangnam area says tobacco companies prefer discreet methods of advertising.
“If you want to hire one of the top three D.J.s in the world for a single event, it usually costs 100 million won [$100,500],” says Kim, who wanted to be identified only by his surname.
“We call them and they [the tobacco companies] pick up the tab or at least half the cost,” says Kim, adding that tobacco companies also hire female models who go from table to table and “drop” cigarette products while pretending to engage in small talk.
“They must be spending millions of won on these kinds of activities,” Kim says. “Basically, for every tobacco-related activity at our club, there is a fee. From a business point of view I prefer help in areas that boost attendance at our club, but we do direct cash deals as well.”
The source says club owners are not shy to milk companies for money. “Like liquor companies that sponsor events, we have no choice but to pay because if we don’t, somebody else will and they will get their product in,” says the source.
Under the current law, companies can advertise in magazines under strict conditions: a two-page limit up to 60 times a year, and sponsorship is allowed at sports, musical and cultural events.
Most major tobacco companies operating here deny sponsoring clubs or being involved in any illegal promotional activities.
Lee Jung-hoon, a KT&G official, admitted that the company sponsored clubs in the past, but said that the practice stopped two years ago.
“That is a thing of the past,” he says.
“Under the current law, tobacco companies are allowed to sponsor social, musical, cultural and sports events. Just like the other tobacco companies operating domestically, Philip Morris Korea is operating within the boundaries of the current law,” says Ryoo Hwa-joo, an official of Philip Morris International.
Elyse Yoon, a corporate affairs manager at Japan Tobacco International, offers the same line. “We do sponsor clubs in the Hongdae area but we do it within the boundaries of the law.”
Nevertheless, Jay Rim, 23, a graduate student at a women’s university in Seoul, says it’s not hard to find young women in clubs wearing miniskirts and T-shirts bearing cigarette brand names and selling tobacco products.
“I went to a party last Christmas and they were selling cigarettes inside the M2 club at Hongdae,” says Rim.
Calls and messages to M2 club officials were not returned.
Choi Jin-suk, head of the Korean Association of Smoking and Health, a civic group trying to curtail smoking, says it is illegal to sell cigarettes without the proper license. “It’s very hard to monitor these kinds of activities,” says Choi. 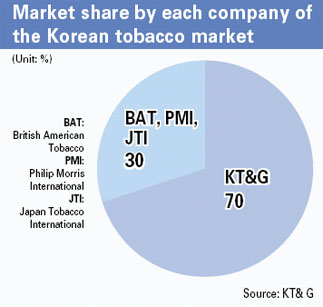 The firms commonly target college areas, according to an official of a conglomerate’s entertainment division frequently involved in joint sponsorship events. “It’s pretty much common practice among big party planners to ask cigarette or liquor companies for sponsorship.”
Whether such tactics are ethical for tobacco companies, it’s a question of staying in business, they say. The domestic powerhouse KT&G ― once a government-run company but now privatized ― made more than 2 trillion won in sales last year in the domestic market alone, selling 70 percent of the cigarettes smoked here.
Foreign tobacco companies that entered the domestic market in 1988 are chipping away at KT&G’s monopoly. Philip Morris International, British American Tobacco and Japan Tobacco International Korea are now commanding a combined market share of 30 percent.
KT&G official Lee argues that his company wasn’t the first to draw the gun. “They started such methods as they tried to expand their market share in an overly aggressive manner,” says Lee, referring to the sponsoring of clubs. For its own survival, KT&G is now also exporting 13 brands of its cigarettes to 37 countries, reaching a sales volume of 370 billion won. Such record sales figures coming from international operations are an indicator of the company’s strategy to differentiate its consumer markets. In 2000, the company’s international sales were only 41.9 billion won.
The company is also expected next month to open a factory in Istanbul, Turkey, which is expected to produce 2 billion cigarettes a year. The tactic is similar to that of BAT and Philip Morris ― they built their own factories in South Korea in 2002 in what industry experts say was a move to avoid a 40 percent import tax on their products.
For a company that once held a 90 percent market share until just a few years ago, KT&G is getting hit not only by foreign brands but also by domestic companies like Woori Tobacco, which is planning to enter the market later this year.
However, the free-roaming days of the tobacco companies might be over. South Korea signed a framework convention on tobacco control with the World Health Organization in May 2005. The framework states that “Each party shall, in accordance with its constitution or constitutional principles, undertake a comprehensive ban of all tobacco advertising, promotion and sponsorship.”
Since the treaty gives a five-year grace period, companies have little more than two years left.
The convention further states that “a party that is not in a position to undertake a comprehensive ban due to its constitution or constitutional principles shall apply restrictions on all tobacco advertising,?promotion and sponsorship.”
In South Korea, tobacco companies have not encountered consumer lawsuits, but the first signs of change came in January 2007 when the country saw its first class-action suit, which was filed against KT&G eight years ago.
The court ruled in favor of the tobacco company, but Bae Myeong-ja, the lawyer handling the case against KT&G, is appealing. “When it comes to a consumer’s right to know, the court here is very conservative. Often internal company documents are not revealed because they are regarded as operational secrets, and the court tends to acknowledge that, unlike the United States.”
Hwang Jeong-hwa, an official at the Finance Ministry, said the biggest problem with the current tobacco laws is that some of them are vague and lack detailed guidelines. The tobacco industry comes under the jurisdiction of the Finance Ministry and the Health Ministry in Korea.
“There is a law but there are conflicting articles that do not accurately reflect the situation on the ground and need to be amended,” Hwang says.
For example, cigarette manufacturers and importers are not allowed to offer money or coupons to people or businesses who sell cigarettes for the purpose of promoting their products, but another law states that the manufacturers are allowed to advertise in shops licensed to sell tobacco.
Another law states that cigarettes cannot be sold at places that “operate mainly at night,” but district offices are allowed to interpret that law at their own discretion.