It’s just not cool to mangle the King’s English

It’s just not cool to mangle the King’s English 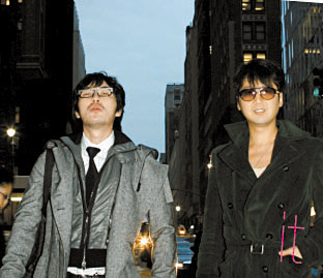 Celebrity wannabes on 밒t Style?often butcher their English ?or Konglish. [On Style]

Let’s face it: reading this column in this English paper on the subway or at a cafe makes you look cool, at least in Korea. Funny, yes, but it is still true that being able to speak this language is a huge source of pride, prejudice and jealousy. This may explain why so many people (who think they) are well-educated have this die-hard tendency to drop English words while speaking in Korean. One of my recent lunch companions was an ideal example. A seemingly sophisticated publicity manager, he filled about half of his sentences with English words.
Although he mixed up “punk” with “funk,” by taking the trouble of pronouncing a fricative sound that does not even exist in Korean, he managed to achieve his goal of looking proud, or, to me, pretentious. Sadly, he made himself a laughingstock when he started to slurp down his anchovy pasta with the sound that my mother warned me about in my childhood. He looked amazed when I told him that I write in English.
I explained with the utmost sincerity that I am fluent in the language and speaking English does not make you something, but he refused to be persuaded. I gave up and left him admiring me in the wrong way. Congratulations, folks, for speaking English!
Well, maybe this is the right time for me and you to go out and make money to burn by teaching English at a private school with a name that includes habadeu, or Harvard.
Wearing a sweatshirt that has the Harvard logo (even though you’ve never even come close to the Ivy League school) and taking phone calls in only English is the perfect moneymaking strategy.
Anyhow, my nightmare with English did not end with that lunch disaster. When I was home the other night, I got ready for my divine, last activity of the day ― watching “Sex and the City,” which has been in reruns for years now.
Waiting for Carrie and Miranda, however, demands a certain level of patience, as I have to put up with commercials for fashion items with an English overdose.
For one thing, one of the cosmetic goods had a Korean announcer repeat, “Oh, this is just too sick.” After a few seconds of frowning and a little brainwork, I figured out that she was trying to say “chic,” not “sick.” So this seems to be what happens when English meets Korean TV ― dancing from chic to sick. That’s not all. The same cable TV channel, OnStyle, is a fashion- and trend-focused network. It seems its strict principle to look cool by dropping as many English words as possible. A new show, “It Style,” airing Tuesdays at midnight, is a classic example.
Starring two fashion-conscious male stars, this show introduces the latest trends and answers fashion-related questions from viewers. Fine.
The thing is, the two male celebrity-ish creatures, who are 100 percent Korean, say words like il-lek-teu-rik kal-la (electric color) or sick style or oldeu look (old look). I was wearing a “rotten smile” ― sseokso in Korean slang means sardonic smile ― for a good hour of that show.
Call me an unfashionable fool who is far from cool, but there is no way for me to understand what “electric color” means. Of course, I could not stand another “sick” style ― it almost made me sick. These two celebrity wannabes wearing we-are-so-cool looks on their faces were comical.
I recently saw another example of nightmarish English usage on a Korean TV news cable channel called YTN.
On their Break News headlines, they wrote Arkansas as “Ah-kan-sa-seu.” Well now.
At least for the time being, there seems to be no way for me to escape the vulgar use of English in this country, where the beautiful Korean language is treated like fish that is more than three days dead.