Beyond a decorative role

Beyond a decorative role 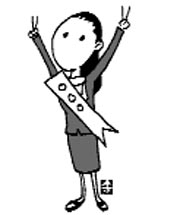 Some women who once dutifully took public roles on the sidelines as a politician’s loyal wife later became politicians themselves.
Hillary Clinton, the wife of perhaps the most famous politician in the world, is a United States Senator from New York State and now a candidate for the Democratic Party nomination in the 2008 U.S. presidential election. If she wins she would make history by becoming the first female president of the United States, taking the spot once held by her husband, Bill Clinton.
Ironically, Hillary Clinton also showed that the role of a politician’s wife is not so glorious. While she was First Lady, she had to endure the consequences of her husband’s sex scandals. Her appearance at his side in public when Bill Clinton was forced to publicly apologize for his appalling misbehavior was crucial for resolving the political crisis facing the president at the time. Since then, staging a press appearance to issue a public apology with the wronged wife standing by has become de rigueur for an American politician facing a moral scandal.
Shin Eun-kyung is the wife of lawmaker Park Sung-vum, who recently failed to win a Grand National Party nomination for the April general elections. Of all people, her rival for a National Assembly seat is Na Kyung-won, the feisty spokesperson for the GNP. Their rivalry attracts attention as a tight contest between two female public figures.
Of course, the fact that a politician’s wife enters a political career is not a matter of concern itself. If she is entering the political arena to inherit her husband’s place, however, it poses a serious question, because her political career is simply based on being a good wife for her husband.
Female politicians have never been free from the curse of condescension; it’s because many are assumed to gain undue benefit from their family background. The thinking goes that they enter politics with a halo effect, or at least the advantage of name recognition. In addition, they are expected to live up to the public image and ideal behavior of a politician’s wife.
But there are many female politicians who sweep aside the obstacles that come with being a politician’s wife.
Some have succeeded in becoming political leaders, despite having unconventional family lives. Voters the world over are showing that they can elect women on their own merit.
The public is showing that the role of women in politics should be changed ― an epoch-making political development.

The writer is deputy culture and sports editor of the JoongAng Ilbo.