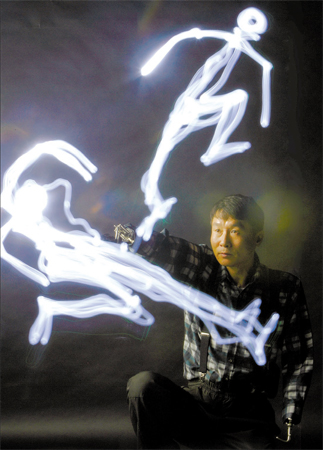 Suk Chang-woo, a double-amputee artist, works on a painting about the human body’s diversity of motion. By Park Jong-geun

A serious work-related accident in 1984 left Suk Chang-woo with two artificial arms, metal hooks in place of hands, and a new career as a critically acclaimed artist.
Suk says it is only natural for him to use the human body as his subject matter, since to a large extent his new life as an artist has been determined and defined by the accident.
His paintings often focus on the energy of movement, humans immersed in soccer, cycling or wrestling.
Motion is one of the main themes running through his work.
So it seems only natural that he is now in Beijing, the host city of the Olympics, for a solo exhibition at Gallery Yonwoo Junart that started April 1 and lasts through Monday.
The theme of the exhibition is fitting: the Olympics and the beauty of sport.
At his Daebang-dong studio in southern Seoul shortly before his trip to Beijing, Suk looks at his prosthetics with what seems like a sense of pride.
“They’re strange, I know,” he said, acknowledging that for most people, his artificial hands are not an everyday sight. He can sense people’s unease and he is quick to dispel any awkwardness.
“It took time to find the best angles for me to paint,” he said, reaching for a brush and starting to work on a canvas.
His movements are swift as he starts to draw a man in a bicycle race.
Within a few minutes, the picture was complete. It’s quite an accomplishment.
But isn’t it hard for him to do other things, for instance, eating?
“Sure, it is hard,” Suk said. “Once my family adjusts my hooks for painting in the morning, I have to spend the whole day alone in my studio. There’s noone here to change the angles for spoons or other objects.
“But, you know what, I paint all day and I feel happy enough while painting. I can’t stand a day without painting now.”
Until 1984, however, painting as a career was not even on the radar. He was happy with his life as an engineer working at an electricity-related factory.
“I studied engineering all the way through college, and engineering seemed a lifelong vocation for me,” he recalled.
But on a seemingly normal day in 1984, Suk got electrocuted while working on some machinery.
He passed out, and when he woke, the medical team had been forced to amputate both his arms.
His first response was despair, a black mood that lasted for several months. He felt that his life had ended, and he sank into depression.
A few years later his wife, Park Hye-suk, encouraged him to look into getting artificial limbs, an option Suk had not considered seriously until that time, such were the depths of his frustration.
But in time, his wife’s persistence paid off. “You can even go fishing. You loved fishing, didn’t you?” she would tell him. Gradually the idea took root and Suk pulled himself back from the brink.
It took some time to get used to his new limbs, but the old adage is true: practice makes perfect.
Then one day his son Jong-in, approached him. “Dad, I have a painting homework, and mom told me to ask you for some help.”
Suk wondered what he could draw, as he has never pictured himself as a painter. After some hesitation, he started to draw a bird in his son’s sketchbook. The result was a revelation.
“Man, I could draw! It was a whole new discovery,” Suk recalled. “My life had not come to an end.”
Soon the painting sessions between son and dad became routine, and the sketchbook soon grew tattered through overuse.
The next stage was for Suk to get lessons. After asking around, he found Yeo Tae-myoung, a professor of art at Wonkwang University, who taught him calligraphy. 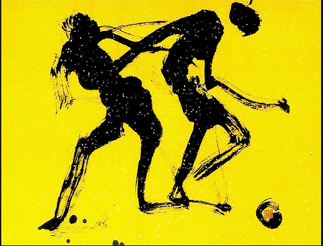 The artist uses motion in sport as one of his major themes.

When Suk began to master the art of calligraphy, Professor Yeo recommended he try sketching nudes, which signaled Suk’s interest in the human body.
However, Suk did not stop there. The deeper he delved into his art, the more he began to try out his own styles and eventually he created his own genre, mingling calligraphy and nude sketches.
It was a chore to use Chinese ink and brushes to draw human movements, he said, and he started to be taken with subjects in sports.
He soon started to make a name with his works, and by 2006, he won international acclaim after gallery owners and art experts in the United States, Switzerland, Italy and France, just to name a few, saw his sketches that were inspired by the German World Cup.
Most recently in Korea, he was asked by the cycling foundation to make an exhibition on the sport.
He spent months learning about cycling by watching cyclists at a stadium in Gwangmyeong, Gyeonggi.
After 10 months he picked up his brush. “I was fascinated by the speed of the sport and the competition,” Suk said. “I love drawing human body movements.”
What’s next? This is the question that he asks himself these days. “I’d like to describe the beautiful lines that the figure skaters orchestrate,” he said.
“Now that I recall, everything I did was possible because I made up my mind to do that. I guess that the hard times after the accident made me what I am today.”