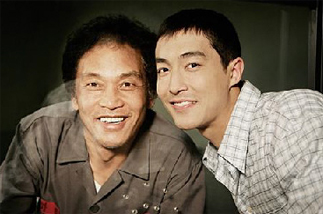 Love for one’s family does not always run through bloodlines.
“My Father” presents a warm story that shows us that even those who aren’t related by blood can have still waters that run deep.
The main plot may seem cliche: An adopted Korean-American soldier James (Daniel Henney) comes back to Korea, looking for his birth father, Hwang Nam-cheol (Kim Yeong-cheol), who is in jail under a death sentence. If Nam-cheol had turned out to be falsely charged, that would have left the audience in tears, with no lingering feeling after the film.
My Father, however, succeeds in escaping this obvious melodramatic pattern with a twist in the story.
At first the film seems to idealize the criminal past of Nam-cheol as he tells old war stories about his former bands and romancing James’s mother Eun-joo, while revealing nothing about his murders. Those stories make the audience believe that Nam-cheol is a nice guy; it is more than enough for James to fall in love with his nice, oh-so-cool father.
And yet, My Father reveals a sad reality when James finds out that his father actually used to be a cigarette delivery boy among murderous hookers, one of whom was his mother. Most shockingly, James realizes he and his “father” are not genetically related.
James faces the choice of returning to the States and trying to forget that Nam-cheol ever existed.
In the end, James leaves, but before he departs Korea, he fills out a form to be adopted by Nam-cheol. The criminal manages to grow on the young soldier.
The film’s title reflects the pure affection that a son can feel toward his father and the longing for family that has long resided in James’s heart. The two men are already family because of the love between them. A technicality like blood doesn’t matter anymore.