[TV review]Save me from this world of seriousness

[TV review]Save me from this world of seriousness 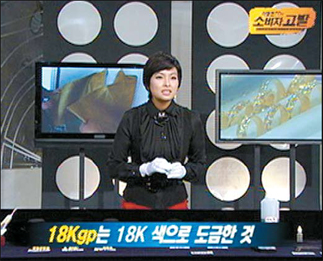 So I should be worried about a mouse head in my snack pack.
I have to get tense about taking an elevator for fear of a possible attack from some kind of criminal.
Thank God I don’t have a child. If I did, I would not be able to write this column. I would be constantly worrying about the little thing coming back home safe from school.
In the meantime, I cannot trust the chicken sandwich that I’ll have for lunch today, because of the avian influenza that was detected a few days ago.
Oh, and watch out for the motorbikes gunning along the city’s sidewalks. It would be really bad luck if you survive bird flu, rat’s heads and mad people in elevators, only to get mown down by a pizza delivery boy on a scooter.
It seems that surviving just one day in this world is a formidable task.
This kind of anxiety only grows when you tune into the KBS-TV show, “Lee Young-don’s Accusation for the Sake of Consumers.”
Airing Fridays at 10 p.m., this consumer magazine show does not match the TGIF spirit.
Rather, it is a serious wake-up call for how untrustworthy and dreadful our society is, as it investigates how commercial products deceive consumers.
With a round of experts hammering out issues, the show has grown into something of a reincarnation of justice.
In a recent episode, the producers took issue with local home shopping channels that sell everything from apartments to magic-like detergents and five pairs of pants at 19,900 won ($20).
From the first to the last moment of the show, the producers adopt a serious tone of voice, emphasizing that these channels are just out to fool potential customers like me, and perhaps you.
In the part about the detergents, the experts accused the home shopping industry of using iodine to show how their detergents magically clean soy sauce stains off a white shirt.
The show’s experts claimed that it is not actually soy sauce but brown-colored iodine that turns white when it meets the alkaline detergent.
After the experiment, an anonymous former home shopping producer said, “It’s all a fraud!”
The current producers of the channels then piped up that they are not swindling customers.
Well, I have to confess I have a set of hair curlers and a mini vacuum cleaner that I bought from a home shopping channel, and I had this deep frown on my face while watching this show.
I frowned so hard that I briefly considered buying a wrinkle-care cream that was available on another channel, at a very reasonable price as well.
So this KBS-TV show is doing a sublime job of raising consumer awareness, but here is a small suggestion from a consumer.
Can there be just a little element of humor in the show, instead of ranting and raging all Friday night?
Michael Moore’s documentary “Sicko” just opened in Korea and proves that consumers can take issue with products and companies in a variety of ways and with humor, not just pious shouting.
Sicko was two hours of serious commentary on the U.S. health system, but the documentary was also funny.
Unfortunately, one hour with Lee Young-don on the KBS-TV show was like a constant anxiety attack brought on by just being alive.
It seems that nothing is safe, so maybe I should pack my things and just leave.
But wait, I can’t take a flight now because this KBS-TV show recently aired a program about airplane passengers getting exposed to radioactive rays.
Well, there seems to be nothing I can do safely, so in the meantime I have this strange craving for the snack that had a rat’s head neatly packaged inside with its crackers.
What’s wrong with me?