Only big bucks will bag you a Malayan tapair

Only big bucks will bag you a Malayan tapair

The global economy is in meltdown. The dollar is plummeting, stocks are falling and food prices are skyrocketing.
You would be better off investing in tapirs and elephants, if it were possible.
The cost of animals commonly seen in zoos is leaping higher than a springbok on the plains of the Kalahari.
Factors such as tougher regulations on the import and export of wild animals, threats to habitats, urbanization and global warming have made the exhibits at Seoul Grand Park in Gwacheon, Gyeonggi, overnight million-dollar assets.
“Trade in wild animals and endangered species is more restricted than before,” said Kim Bo-sook, a managing director at Seoul Grand Park. “This means the cost of buying an animal is skyrocketing.”
Seoul Grand Park houses Korea’s largest zoo with over 3,000 animals.
The zoo decided to exchange animals with Samut Prakan Crocodile Farm and Zoo in Bangkok. Both sides put a price on the animals that they exchanged. At that time, a Malayan tapir was reckoned to be worth 60 million won. But because of fluctuation in the world animal market, the value of a Malayan tapir has risen to 450 million won ($459,450).
The zoo now has two Malayan tapirs and together with two Komodo dragons that were part of the deal, valued now at 130 million won each, the zoo has scored an unexpected windfall.
The animals will be shipped over within the next two months.
The park now owns five animal species provisionally valued at more than 100 million won each. The top three most expensive are the lowland gorillas (2 billion won), Pacific dolphins (150 million won) and Asian elephants (140 million won).
There are no public organizations or government agencies in Korea that monitor prices. With no intervention and with zoos dealing directly with other zoos, the cost of the animals is at the mercy of pure supply and demand.
As with other products for sale, the rarer the item, the greater the price.
Lowland gorillas, for example, are one of the most expensive species worldwide. They are critically endangered and those in captivity reproduce infrequently.
There are two, one male and one female, at Seoul Grand Park.
Ten years ago, a lowland gorilla cost 500 million won. Today, each is valued at least 2 billion won. Every year, there is a 10 to 15 percent price increase in primates.
Gorilong, the male lowland gorilla at Seoul Grand Park, is more than 40 years old. Though he has been cohabiting for 24 years with Gorina, a female gorilla nine years younger, they haven’t had any babies.
Considering Gorilong’s age and that a lowland gorilla usually lives to be 50, offspring are unlikely at this late stage, making this primate even more expensive.
The cost of an elephant, on the other hand, is more restricted and depends on a number of factors other than rarity.
Asian elephants (140 million won) are usually in greater demand than African elephants (80 million won), for instance.
“Southeast Asian countries tend to revere elephants for religious or cultural reasons, so they are more reluctant to export elephants,” Kim said.
As working animals in many parts of South and Southeast Asia, elephants are regarded as national treasures, especially in countries like India. “This makes it difficult for these countries to export elephants,” said Bae Jin-sun, the director of animal planning at the zoo.
“They can overcome the redtape but it is a complex business.”
An elephant conservation organization in Thailand called Friends of the Asian Elephant, a kind of animal welfare watchdog, undertakes to inspect the conditions of the zoo to which Thai elephants are bound. The organization then proposes the conditions of the contract.
In addition, rights organizations for wild animals in Thailand have campaigned for limits to be set on the number of animals that are sold overseas. The net result is that African elephants, which used to be a cheaper buy than their Asian cousins, are seeing their value soar.
“Early last year, you could buy an African elephant for 6 million won,” Kim said. “But the price has skyrocketed to 80 million won in recent months.” In fact, the price leapt 12 times within a year.
Prices also vary between animals that look very similar, but differ in terms of scarcity.
A polar bear is tagged at 70 million won whereas a Malay bear is 20 million won. A European brown bear costs even less — 6 million won. Polar bears are more costly because of global warming.
How fast an animal can reproduce is also a key factor. In general, primates reproduce less than other animals, which adds zeros to their price tag. Based on reproduction rate, a chimpanzee, for example, costs 60 million won; an orangutan, 45 to 50 million won; a lemur, 15 million won.
Orangutans reproduce well and are relatively inexpensive, even though they are bigger than most other primates.
The story of the dolphin is even more complex. Usually, a dolphin would set you back 30 million to 50 million won, but the price goes up if the animal has been trained for aquatic shows in zoos. Seoul Grand Park pays up to 150 million won for a performing dolphin. However, the training is thought to be so stressful that it can reduce an animal’s life expectancy. 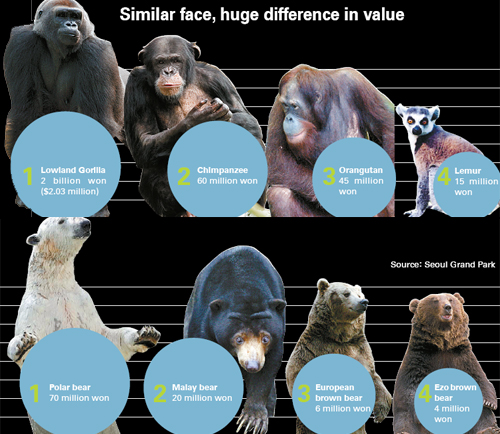 Age is a significant factor in determining price. Animals that are aged between 17 and 20 years are the most valuable, except for giraffes and elephants. Because of their size, they reach their best price after birth and before they are 3 years old, since as they get older, they become too cumbersome to transport.
Disease is another factor affecting price. To curb the threat posed by highly infectious diseases such as foot and mouth, hoofed and even-toed animals, such as pigs, are heavily scrutinized and all undergo a thorough medical check.
This translates into problems in maintaining animal numbers. “Take springboks as an example,” said Bae. “There aren’t that many in Korean zoos because there are so few mating opportunities. We always need new animals to enrich the resources to raise more animals.”