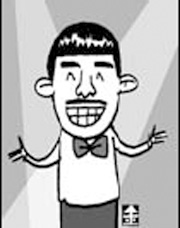 Comedy is another way to read the world. In the limelight these days in the world of comedy is the KBS-2 TV show “Dalin,” meaning expert in Korean. The expert at the heart of the people’s attention in this show is an arrogant and foolish liar.
In each show he is introduced as one kind of expert or another. In one episode he says he is a master celibate who has not dated a woman in 16 years. Of course, this is exaggerated and false. Instead of never having dated a woman, he is a compulsive skirt-chaser. He is also introduced as a master at keeping his eyes open, who has never blinked for 16 years. But in reality, he is the opposite of what he claims to be. He is a funny character; he forcefully keeps his eyes open, but he hides his eyes the moment he blinks.
He is a man of deceit and lies who has nothing to show, but wants to show off. No one checks his credentials until, in the end, the truth comes out and he leaves the scene after a “whuppin’ upside the head.”
The man’s reputation gets shredded each time during the popular show, but an expert is no lightweight. The word “dalin” comes from the Japanese word datsujin. It means someone who has made a lot of effort in one area and gains the highest level of expertise.
Both words are, ultimately, of Chinese origin. The word dalin appears for the first time in the book “Zho Zhuan.” It says that an adult of high virtue who does not see the light of success will have successful descendants. It refers to a successful person of eminence.
“Tong,” which means that something connects, and “dal,” which means that one reaches a point, mean the same thing in the end. They refer to a person who clearly knows how things work in the world and properly understands human principles. The Chinese later began to call such a person an expert. In the end, an expert is a person who lives life with deep insight.
Japan later defined a dalin as someone who has reached a high level of skill and artistry. It reflects their respect for real capability. The word dalin, reincarnated as such in Japan, is now widely used in Taiwan and Hong Kong, showing Japan’s strong cultural influence.
In Korean politics, fake dalin proliferate. Rumors spread during the legislative elections about the construction of “new towns” and about lawmakers elected through proportional representation who were eventually arrested. It lies in the thinking that doing anything to win politically is all that matters. No wonder the comedy show Dalin is so popular; it’s the talk of town because it laughs at obvious deceit and lies.