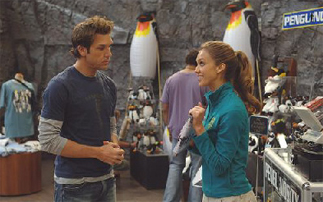 “Good Luck Chuck” is a strange mishmash between the average American comedy and a typical chick flick: It contains an appropriate amount of humor and inappropriate amounts of sexual content.
Although the movie has received terrible criticism, the main plot is not that bad, worthy of more than a paltry 3 percent rating on Rotten Tomatoes.
Any big fans of “Knocked Up” or “Wedding Crashers” will find Good Luck Chuck amusing and fun.
Stand-up comedian Dane Cook plays Dr. Charlie Logan, a legendary “lucky charm” whose sexual conquests find the love of their life immediately after sleeping with him.
This is all because of a hex from his childhood, but Charlie benefits from it by having guilt-free sex with desperate women wanting to find their soulmates.
A constant parade of topless women can surely be offensive to the some viewers, but the naked eye candy stops when Charlie meets his dream girl Cam Wexler (Jessica Alba), a clumsy but adorable penguin zookeeper.
The latter half of the plot is just another sweet, simple romance with a happy ending after overcoming some troubling obstacles.
Charlie falls in love with Cam, but he is afraid that once he sleeps with her, she’ll fall in love with the next guy.
Charlie’s insanity freaks Cam out, and she gets gloomy when she realizes there’s no perfect guy out there.
In her despair, Cam talks about how penguins are loyal to their mate and how male penguins romantically propose: They pick up the most beautiful pebble they can find and present it to the female penguin that they love.
The penguin story draws a parallel to Cam’s desire to find someone who is just right for her.
The main plot, as mentioned earlier, is not that terrible. The film tells a cute, funny story that people can sit back, relax and enjoy.
Critics say Good Luck Chuck is too gross and cheesy with surprisingly graphic sex scenes and a ridiculously typical romance plot.
But this much criticism seems unfair. Aren’t chick flicks all about cheesy romance lines, sparkling eyes between lovers, and some exotic bed scenes combined with absurdly tacky plots?
Good Luck Chuck may have crossed the line between sexy and gross, but overall, it is not that bad with other funny elements that continuously make the audience laugh.
The adorable penguins don’t hurt, either.