The loss of a literary luminary

The loss of a literary luminary 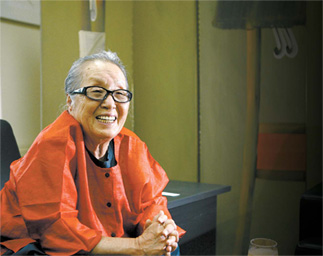 The funeral hall at the Asan Medical Center in southeastern Seoul was full of flowers mourning the death of the novelist Park Kyung-ree.
A long list of names in the guestbook showed that luminaries from the literary, environmental and political circles had already paid their respects.
Among Park’s mourners was President Lee Myung-bak, who made an unscheduled visit to the hospital on Tuesday morning. Ryu Woo-ik, the presidential chief-of-staff, and Shin Jae-min, the deputy culture minister, accompanied him.
Lee took a moment to offer a silent prayer and burned incense. He then laid the highest honor that can be awarded to artists in Korea in front of her picture: the Gold Crown Medal.
Park’s son-in-law Kim Ji-ha, a well-known poet, greeted Lee at the hall accompanied by the mayor of Tongyeong, Jin Euy-jang, and Park Wan-suh, a fellow novelist overseeing Park’s funeral. The port town of Tongyeong in South Gyeongsang was Park’s hometown.
Lee said he was sorry that he had missed the chance to encourage Park to undergo surgery for lung cancer. He was supposed to have met Park last month.
According to the presidential office, Park was scheduled to give a special lecture to the Blue House secretaries in late March when she came down with food poisoning. 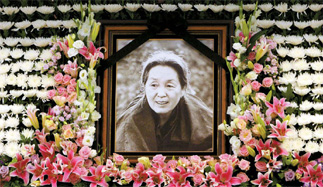 Her lecture was postponed to April 8, but her overall health deteriorated and she was hospitalized. The talk was canceled.
Like the heroines in her novels, Park, the celebrated author of “Toji (The Land)” who died Monday, led an eventful life.
She once said that her motivation for writing had always been pain and sorrow, and that she would rather choose an ordinary and peaceful life than be unhappy and become a good writer.
Tongyeong was the setting for her earlier novel, “Daughters of Kim’s Pharmacy” (1962), and it was there that Park spent an uneasy youth. Her father left her mother for a younger woman, and the writer’s own marriage lasted just four years — her husband was killed during the Korean War (1950-1953). His death was tragically followed by the death of her 3-year-old son during the war.
The trauma of war and malevolent human nature fed into many of her works.
In her first novel, “Age of Distrust” (1957), the author delves into the story of a widow who loses her husband when United Nations forces bomb their village during the war.
Scathing descriptions of war and ideological tension are better presented in “Market and Battlefield,” which parallels the two arenas as modes of human survival.
Park’s literary career reached a peak with the historical epic Toji, which is regarded as a landmark in Korean literature.
The book covers turbulent phases of modern Korean history, from the Donghak peasant movement in 1894, which led to an anti-government uprising, leading to the country’s liberation from Japan’s colonial rule in 1945.
The book is mainly set in Hadong, South Gyeongsang, the home of the novel’s heroine, Seo-hee. From there, the story travels through the mountains, fields and seas of Busan, Japan, Russia and Seoul.
Over 700 characters star in this epic family drama, a story beautifully interwoven with vivid tales of lust and love across the generations.
The novel centers on Seo-hee, a property heiress in Pyeongsari, where the fictional heroine lives, and her quest to win back family land that a relative has stolen.
The drama unfolds through various subplots, such as a secret affair between the heroine’s stepbrother and his sister-in-law; the heroine’s marriage, which ends in betrayal; a maid who seduces the heroine’s father to win possession of his property; and the murder of Seo-hee’s father.

She eventually reclaims her family land, but only after she learns that the land can never be the possession of man; man is possessed by the land.
The first volume of the novel was published in 1969. The novel took 25 years, 16 volumes and five serials to complete.
In the book, Park touches on just about every major event that took place in modern Korean history, small or big. Included are the great earthquake in Kanto in Japan in 1923, where thousands of Koreans died; a cholera epidemic that hit local villages; the death of a villager from opium addiction; the Eulsa Treaty in 1905 that made Korea a protectorate of Japan; the Manchurian war; and Japan’s annexation of Korea in 1910.
Park’s life was just as checkered with adventures and ordeals during the years she wrote Toji.
She was diagnosed with breast cancer and had a mastectomy. During the second serialization of the novel, her son-in-law Kim was arrested and sentenced to death after he criticized the local military government through his political satire “Five Thieves.”
Because Toji captured the sentiment of the people and their ethnic tribulations, politicians often viewed Park as a literary advocate of nationalism.
Toji ends as Seo-hee hears news from her daughter about Japan’s surrender in 1945.
During election periods, Park was often seen in newspapers with liberal party candidates as her guests at her home in Wonju, Gangwon, where she moved in 1980.
In reality, the writer often stressed the dangers of falling into “ethnic egoism.”
Instead, the spirit of the land and the people that comprise her epic turned her into a devoted environmentalist.
She got involved in a number of ecological activities in Wonju, including organic farming, which she took great pride in.
She once said the most rewarding moment in her life was when she picked and ate the tips of red peppers she grew in her field. At lectures, she often stressed the importance of life in relation to her novels.
“I try harder to maintain respect for my life than to write a great story.”
She carried out that philosophy to the end of her life. In 1999, Park built the Toji Foundation of Culture as a retreat for Korean writers.
There, Park’s admirers and young writers remembered her for preparing meals made of homegrown crops.
The writer will be buried in her hometown of Tongyeong tomorrow morning.