[TV review]TV ‘Radio’ stars are no match for true D.J.s

[TV review]TV ‘Radio’ stars are no match for true D.J.s 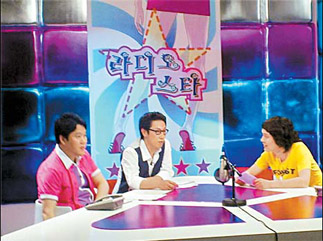 This seems to be a belated confession to make after almost six years of reviewing Korean television, but I used to be more of a radio person.
Video might have killed the radio star, as the song goes, but the culture of radio is ever-present, like a friend always there for you with an understanding nod.
There is a certain greedy characteristic in television. It conquers all your attention and occupies your eyes and ears.
Radio, though, is more interactive: It is ready to listen to what listeners have to say in their letters or phone calls.
I was in love with radio, especially in the 1990s, long before I took up reviewing television programs. That was during the heyday of radio, when glib D.J.s ruled the airwaves.
There was Shin Hae-chul, a band leader and singer who shone on “The King of Darkness.” His sharp tongue knew no boundaries and he took on political, diplomatic and cultural controversies with wit and style.
Then there was the pop musician You Hee-yeol, who made his name with sad love songs and through his irreverent radio talk show.
Back then, 20-somethings listened to these D.J.s until late into the night. They were like our best friends. Shows like “Music City” that aired from midnight to 2 a.m. were hugely popular.
However, nothing good lasts forever, and the D.J.s bid goodbye with the arrival of the 21st century. Talk about the end of an era. I’ve grown used to a time without radio, although nights seem so much longer now.
So no wonder the TV show “Radio Star” had me hooked. It’s a segment of a Wednesday MBC-TV entertainment show with a dubious name that can be translated as “Golden Bonanza.”
Under the theme of “radio that you can watch,” this MBC program takes the form of a radio show where D.J.s chat with the guest of the week.
Ultimately, the show is a disappointment, as the program is basically TV talk show that just uses the radio format.
The D.J.s on the show do nothing but chitchat, which is neither inspiring nor funny. All they do is launch physical and personal attacks against each other. The concept is basically flawed: trying to seek convergence between television and radio.
After listening to the meaningless chitchat of the TV D.J.s for about half an hour, I turned off the television and started reminiscing about radio. I surmised that TV viewers are just an audience for the D.J.s’ clowning; they are not interactive listeners who befriend the hosts of the show.
So the MBC-TV show under the mask of radio did nothing to soothe my radio nostalgia. Recently, however, I could not believe my ears when I heard that true radio stars from the 1990s made a comeback late last month.
Both Shin and You are back on radio from midnight on SBS and KBS radio, respectively. You’s radio show is aptly titled “Radio Paradise,” where the musician plays music that matches the mood of the night and listens to callers who phone for a chat.
Shin’s show uses the same name from the old times: “Ghost Station.” Shin listens to the worries of listeners and shares good music with them and us.
Local magazines and newspapers are also embracing this long-awaited return. The reporters writing special radio coverage were probably fans of You and Shin in the 1990s.
I have this feeling that I might have less time for television now that I have renewed my love affair for radio.
That said, I am not preparing to change the theme of this column, even though a regular review of the radio waves would be an interesting read for fans who tune into their favorite station every night.
But, there’s no doubt television is still a driving force in Korean culture, a window into what makes this country tick.
In the meantime, I can’t wait for tonight and D.J.s You and Shin.
Welcome back, dear radio.