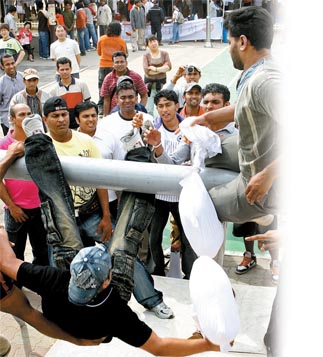 Workers from Sri Lanka enjoy a pillow fight on the field next to Geumcheon library in April. By Byun Sun-gu

With the growing number of foreign workers in Korea and more foreigners marrying Koreans, the country once known as the Hermit Kingdom is no longer a homogenous nation.

Unlike the past, foreigners living in Korea are forming communities and setting up networks as well as participating in festivals around the country.

On April 20, approximately 1,000 foreign workers of Sri Lankan nationality gathered on an open field next to the Geumcheon library, southwestern Seoul.

The workers were celebrating the Sri Lankan New Year, which was April 13 to 14. The workers came from all over Korea, from as far away as Busan and Ulsan to participate in the festivals. Some high-level politicians from Sri Lanka even made the trip to Korea to take part.

A week later, Mongolians held their own festivals. One took place at the National Institute for International Education Development building in Hyehwa-dong, Seoul.

More than 400 Mongolian students studying here showed up. A similar event was being held at Olympic Park, where some 3,500 Mongolian workers spent their day kicking soccer balls and eating their traditional food.

There are other communities that frequently meet. One is a group of foreign women married to Korean men. They meet on the third floor of the Seoul Immigration Office on the last Friday of each month. They gather to talk about their life in Korea and share knowledge about running a multi-cultural family. In the April meeting, a 27-year-old Uzbek woman started a conversation when she commented that she was harshly scolded by her mother-in-law recently because she placed a spoon with the curve facing the ceiling.

Cho Myeong-ju, a 46-year-old Chinese woman, told the younger woman, “Everyone makes a mistake at first.”

Ahn Seung-hee, a 35-year-old Vietnamese-Korean at the meeting said, “There are still a lot of Korean households that don’t let Vietnamese women leave the house for fear that they will run away.”

The foreign wife community was established in September 2006 with the help of the Seoul Immigration Office, as foreigners married to Koreans exceeded 110,000. The foreign spouse online community (http://cafe.daum.net/immigration) has 5,000 members and when the community celebrated its first anniversary last year on Sept. 1, more than 400 people showed up.

Celebrating festivals and enjoying cultural events isn’t all the foreigners living in Korea are doing.

They are giving back to the country that has welcomed their stay.

Some 30 people of a Bangladeshi community in Seongnam, Gyeonggi, in December traveled down to Taean, which was devastated by the oil spill, to help clean the mess. Three of the members have remained in Taean doing volunteer work.

The community started small in 1999 and grew into an organized group in March of 2003 when they appointed a chairman and vice chairman.

An Indonesian community started from a church, Hatielok, in 2000.

Han Kwang-suk and her Indonesian husband and pastor, Yohames, opened Hatielok in 1999 in Garibong-dong, a neighborhood in southwest Seoul where residents are mostly foreign workers. There, Indonesian workers not only celebrate holidays such as Christmas but also hold weddings and community services.

Some have gone far as to provide news of their hometown to fellow foreigners. At MWTV, a broadcasting station for foreign workers in Korea, Soe Tant Bo Ko Wine from Myanmar delivers news with other foreign news casters. 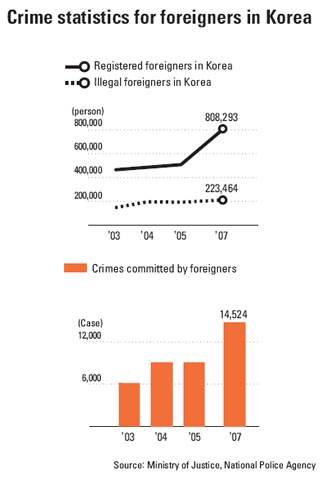 The World Competitiveness Yearbook, published by the International Institute of Management Development from Switzerland earlier this month, featured commentary that Korea is passive about absorbing foreign culture and that companies have difficulty hiring needed foreign workforce.

Among 55 countries studied by the institute, Korean ranked last in opening up to foreign culture and ranked second to last in immigration law.

Experts say this is because Korea has remained a homogeneous society for many centuries. With Korean society riding the globalization wave, however, things are getting more diverse.

“Foreigners have become more than low-income labor workers. They have become part of the complex social development that extends to marriage, family, emigration, citizenship, education, welfare and identity,” said Yoon In-jin, a sociology professor at Korea University and an expert on policies regarding foreigners.

Moreover, Korea has no choice but to break from its previous homogeneous culture with the country speeding toward an aging society.

According to the National Statistic Office, senior citizens over 65 accounted for 9.1 percent in 2005. By 2018 seniors are predicted to make up 14.3 percent of the entire population and more than 20 percent by 2026. This means that the number of people between 15 and 64 who contribute to the nation’s economy will be reduced. The statistic office believes those contributing to the nation’s economy will reach its peak of 36 million in 2016 and drop to 22 million in 2050.

Experts say the way to solve this problem is to allow more foreigners to work in Korea. And to do this, related laws and the system need to be improved.

A recent research study released by the Samsung Economic Research Institute noted that the power of minority groups, such as the Asians, Hispanics and AfricanAmericans, have been increasing in American society.

“In the United States, although there are side effects such as racial conflict, there are more positive aspects, such as economic vitality and cultural diversity,” said Kim Hwa-nyeon, a research fellow at SERI.

“This is because the legal system protected the rights of minority groups and reduced racial discrimination,” Kim added.

Yoon of Korea University said, “The Korean government needs to quickly develop a detailed program and a general policy that will stimulate the systematic supply and demand of a foreign workforce as well as their adaptation to society.”

Experts say Korea should be aggressive in inviting foreigners with advanced skills rather than depending on low-income-earning foreigners.

One way to do that is to find ways to help them settle in Korea, such as offering permanent residency status or making them feel attracted to Korean culture and welfare.

Additionally, Korea has to respect the diversity of foreign culture instead of forcing Korean culture on foreigners.

Last year an illegal Chinese resident in Korea was found guilty of killing a woman. In March, a middle school student in Yangju, Gyeonggi, was found to have been murdered by an illegal foreign resident.

According to the National Police Agency, in 2003 there were 6,144 crimes committed by foreigners. However, the figure doubled to over 14,000 in just four years.

The good news is that the crime rate for foreigners is less than that of Koreans.

An official who wished to remain unnamed at the National Police Agency said crimes committed by foreigners may stand out because of a few major cases, but when it comes to the overall crime rate, the figure isn’t too high.

However, some say society is too soft on crimes committed by foreigners.

“Still there is a lot of marriage fraud [committed by foreigners],” said Kim Soo-gwang, a lieutenant at the Gyeonggi Provincial Police Agency.

“Even in some cases when the suspect is caught, they are only given a fine instead of being forced out of the country,” Kim added.

“When the public doesn’t think too much of it [crimes committed by foreigners], it really drains out the energy,” Kim said.