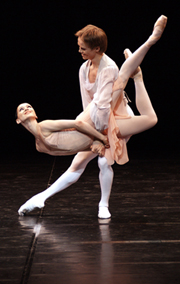 Olesia Novikova (left) and Leonid Sarafanov. Provided by the organizer

The emotive art of dance will be prancing its way into the Sejong Center for the Performing Arts in central Seoul next week, when top ballet performers from the world’s major ballet companies show off their steps. The World Dance Center has invited 14 premier dancers to the 2008 World Ballet Star Festival in Seoul.

The festival will offer highlights from classical masterpieces as well as contemporary ballet selections. Performances are mostly to be pas de deux, a French term that translates as “a dance for two.”

French dancer Manuel Legris and young ballerina Dorothee Gilbert are to perform “Manon,” originially a 1884 five-act opera by Jules Massenet. Legris and Gilbert are members of the Paris Opera Ballet. Legris, 44, will be familiar to some Koreans for his previous performance with Kang Su-jin, a Korean ballerina at the Stuttgart Ballet. Legris and Kang staged “Lady of the Camellias” and “Onegin” during the Korean National Ballet’s New Year Gala in Seoul in 2006.

From St. Petersburg’s Kirov Ballet, Leonid Sarafanov and Olesia Novikova, a 2002 prize winner at the International Ballet Competition, will stage the exotic, masculine “Le Corsair.” The classic is based on “The Pirates,” an epic poem by Lord Byron.