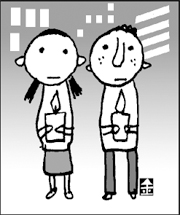 According to French historian Philippe Aries, the concept of childhood only emerged after the 17th century. Until the Middle Ages, a child was only a miniature adult. As soon as they were weaned, they lived and worked as adults. Children were not educated for long at school. Artists of the Middle Ages portrayed them like small adults. The concept of offering them special protection did not exist. Children were often killed and even Jean-Jacques Rousseau, the author of “Emile,” sent all five of his children to an orphanage.

His conclusion is that “the winner in the modern age is not the individual, but the family.” He also made people aware of the life cycle in which a baby becomes a child, then a youth, then an adult and finally a senior. A historical construct in those times, this concept is now considered psychological and pedagogical fact.

Recently in our society, teens are the subject of our attention. They have poured into the streets for candlelight vigils. They speak out against the government, afraid that their stars will get sick from mad cow disease.

We are amazed at their sudden transformation into political agents. These are the new teens, who have surpassed the existing life demarcations imposed by adults.

In reality, teens are already a significant cultural and economic force in our society. In the mass culture market that rapidly arose in 1990s Korea, they quickly drove the adults to the periphery. In the case of pop music, teens are not only major consumers but also producers. Adults are avid fans of teen stars such as Dongbangshingi and Wonder Girls.

Now, teens have emerged in the political arena. Of course, their politics are different from those of adults.

Theirs is a politics concerned with the food in school cafeterias. It is sensitive to personal gain, and cannot stand personal disadvantages. It is Web 2.0 politics, made possible by the internet. It is emotional politics more concerned more with image than issues, and cultural politics that enjoys political demonstrations as a day out. It is politics that surpasses ideology and cannot be measured as either progressive or conservative.

There is debate over whether these teen politics should inspire hope or not. But what is important is that teens have already evolved into political beings. Just as Aries saw our life cycle as a historical construct, each generation’s role is also changing quickly with each era.