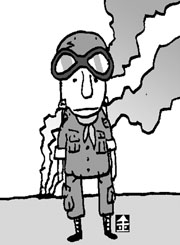 “Mitsuyama, silent for a while, started singing, ‘Arirang, arirang, arariyo, arirang gogaero neomeoganda.’ The voice was full of bitterness. The restaurant owner and her two daughters started singing along together, but soon the song disappeared, leaving the room empty with lament. They put their arms around each other.”

This is an excerpt from “The Firefly Returns,” a book written by Reiko Akabane based on the true story of a night at Tomiya restaurant near Jiran air base in Kagoshima on May 10, 1945.

Mitsuyama was a regular patron of the restaurant. He was also a kamikaze pilot who would die the following day. He took off as scheduled the next day, carrying 250 kilograms of bombs in his jet, ending his short 25-year life in seas near Okinawa.

A lieutenant of the Japanese Empire, Fumihiro Mitsuyama’s Korean name was Tak Kyong-hyong. In all there were 1,036 kamikaze suicide commandos. Among them were 11 Koreans, including Tak. His soul now rests within the controversial Yasukuni Shrine, where a picture of him in his flying helmet is displayed.

Last month, on the anniversary of Tak Kyong-hyong’s passing, several Japanese tried to build a monument in his honor in his hometown of Sacheon, South Gyeongsang. They must have thought that the memorial would be a small step toward the reconciliation of Korea and Japan, just like in the movie “Hotaru,” based on the Tak story. In the movie, a Japanese survivor who was a subordinate of the Korean lieutenant in the Kamikaze corps visits Korea with a keepsake that belonged to his senior officer. An emotional reconciliation is made as the family who at first strongly refused to accept the keepsake finally accepts it in the end. However, in reality, the result was the complete opposite. In Sacheon, the residents were opposed to the monument and civic groups held demonstrations. The ceremony was eventually cancelled and the monument removed.

Even in his hometown, Tak is regarded only as a collaborator with Japan, showing that Korea is still not ready for true reconciliation with its former colonial oppressor. This is because the sincere apology that should precede forgiveness has not been given.

Tak, whether he volunteered or was forced to join, was another victim of history. It is a true tragedy that the man who sang “Arirang” on the night before he died, missing his homeland, had to fly his death shouting, “Long live the emperor.” Before the madness of history, a human being’s fate is small and weak. That is why Tak’s transient death is truly pitiful.