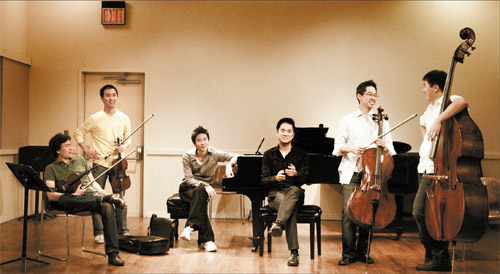 Chamber music group Ditto has returned to Korea for the second time, except this time they are here with new faces and new sounds.

“It’s going to be a big party,” O’Neill said. “Last year when we performed at the Seoul Arts Center, the energy was just so great. It was like a rock concert. I look forward to another successful performance.”

With the exception of Zhang, all members are either Korean or of Korean descendent.

While the six members have distinct backgrounds and musical careers, they share at least two things in common: love for classical music and a desire to share their passions with the rest of the world.

O’Neill, 29, the founder and leader of Ditto, said he and the rest of the group want to introduce chamber music to young people who are not very familiar with the genre.

In line with his vision, he named the group Ditto from divertimento, a musical genre that is lighthearted and often played at social functions.

Last year O’Neill clinched a contract with the classical label Deutsche Grammophon to record an album, becoming the third Korean to release an album with classical musicians’ “dream label.”

He is now working on his fourth album, which is expected to be released late this year.

Amid their busy, global schedule, the six musicians found time to rehearse in New York for a week in April.

“The quality of the music is exceptionally good,” Jee said. “And we’re all on the same note in terms of making fun, easy music. I consider that one of the major perks about playing in the group.

“Our concerts are about bringing classical composers into the mainstream. It’s important to keep on exposing these repertoires to the public.”

Jee has worked with many orchestras including the Buffalo Philharmonic, the National Orchestra of Toulouse and the Orchestra de Chambre Regional D’Ile-de-France, performing across the United States, Canada, and Europe.

From June 15, the group will tour nine cities across the country. They will be performing at Seoul Arts Center on June 28.

Before they embark on the tour, Lee and Jee will be giving solo recitals. Lee will perform at Hoam Art Hall tonight and Jee at the same venue tomorrow.

Lee said his recital will be an accessible one. “You’ll be able to hear how different a violin can sound, the different melodies and notes the instrument can make. Also, you’ll get to listen to beautiful melodies of different styles, different countries and times.

“I hope people would come with an open mind. No need to think too hard. And just relax,” Lee added.

Jee, meanwhile, described his recital as “romantic,” featuring sensual, Spanish-inspired music, with the universal theme of love and, of course, the universal language of music.