A black box of culinary tricks

A black box of culinary tricks


Three young Korean chefs completed a mission ? they brought home a trophy from Dubai, United Arab Emirates, a land as hot as a hotel kitchen.
The spotlight has fallen on Kim Yoo-shik, 31; Lim Ho-taek, 32; Choi Jin-bok, 26; and team leader Bok Jong-dae, 46.
Last month, they participated in the fourth Black Box Global Grand Final, a live cooking competition for 76 of the world’s leading young chefs from 19 different countries. It was the first time the Koreans have reached the grand finals.
They, like the other qualifiers for the finals, won their regional black box competitions. The Seoul chefs, who work at the InterContinental Hotel, won their heat last July.
The black box competition gets its name from the flight recorder installed in airplanes. Each team, comprising three chefs under 32 and a team manager, are given a mysterious, sealed black box that contains a number of unknown ingredients.
After opening the box, the teams have less than 24 hours to prepare a four-course meal. The dishes are later served to the judges and some guests at a gala dinner.
The Korean team won the prize in Dubai, which included a gourmet culinary tour to Australia. A Singaporean team came second and the Sri Lankan chefs, third.
Bok’s team won by a hefty margin. While only one point separated second and third place, the Koreans streaked ahead, winning by 20 points.
“The contest asks for cooking skills as well as creativity, adaptation and team spirit,” Bok said.
Each chef in the Korean team was responsible for different dishes. Kim was in charge of hot dishes, including the soup; Lim dealt with the cold dishes; and Choi managed the chocolates and desserts.
“The cooking skills of these young chefs gets better every year,” said Alan Palmer, planning director of this year’s event.
“The judges were particularly taken with the unique tastes and ideas presented by the team from Seoul,” he added.
In the finals, sponsored by Meat and Livestock Australia, the chefs had to use their 24 hours to concoct a four-course meal for 34 dinner guests using only the ingredients in their black box.
In preparation for the finals, the four Koreans spent most of their time together, brainstorming ideas.
“After spending a year in each other’s pockets we felt like family,” Bok said.
Choi, the Korean team’s only female, even broke up with her boyfriend, while the others had to fend off disapproving family members.
The black boxes were opened on Day 1 of the two-day final to reveal an assortment of ingredients: Australian beef and lamb, Norwegian halibut and salmon, cream, cheddar cheese, beef gravy, French white chocolate, macadamia nuts, mangoes and other essential ingredients such as asparagus, carrots, mushrooms and celery.
And everything has to be used. That’s the rule.
There were some optional ingredients, as well: musk melon, pear, apple, strawberry, salt, pepper, potato, eggs, salt-free butter and paprika.
In addition to the four course meal, the chefs had to make two Asian sauces.
An hour after the contents of the black box are revealed, each team must report to the judges the names of each of the four dishes they plan to cook, including the ingredients that they will use.
“The biggest challenge was cooking for 34 people,” Kim said, especially since the ingredients were limited. For example, there were only 15 eggs inside the black box.
“The number [of eggs] would have been enough for the egg soup that Koreans often drink to relieve a hangover,” Kim said.
Also, there were only 12 sheets of gelatin, which isn’t sufficient to make jelly for 34 diners.
Imagine you’re at a supermarket, Kim explained. There’s beef and you decide to make sweet and sour beef marinated in soy sauce. But what happens if there is no soy sauce? All there is at the market is gochujang, or chili paste.
“You’ll naturally have to make sweet and sour beef with chili sauce,” he explained. “That’s what happens at the contest ? it’s the rule.”
Another challenge was the quality of ingredients. “Frittering is a common and easy cooking method,” Choi said. But there wasn’t any frittering powder.
“We did anticipate such challenges,” Choi said.
While brainstorming ideas before the contest, they ground pasta as an alternative to frittering powder. But there wasn’t any pasta either.
In the end, the Korean chefs ground rice to fry the ingredients. “One of the ingredients we had to use was phyllo pastry, an extremely thin sheet of dough that is one-third the thickness of a sheet of paper,” Lim said.
Usually, chefs combine several sheets together, “but there weren’t that many,” the Koreans explained
In the end, the chefs used the phyllo pastry to decorate the soup.
“We created new tastes in Dubai,” Kim said, with obvious pride. 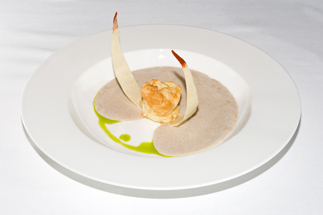 Phyllo pastry pouch filled with cheddar cheese and mushroom soup
1. Bake a souffle in an increasing heat, using egg white dough. The souffle should be softer than bread.
2. Make a thin arch using the phyllo pastry.
3. Place the pasty arch on the soup, evoking bojaki, or Korean traditional wrapping cloth.
4. Decorate each end of the phyllo pastry with paprika.
(There weren’t enough vegetables in the black box to make soup for 34. The Korean chefs decided to add a souffle to the soup, which gained them extra points.)

Oven-baked steak and lamb with potato puree
1. Remove the tendon from the beef to make the meat leaner.
2. Add butter to the steak as it cooks. Use melted butter to tenderize the meat.
3. Prepare potato puree.
4. Put the steak on top of the puree. (Normally, the steak and puree are placed separately. Putting it together, according to the Korean chefs, makes it easier to eat.)
5. Boil the lamb at a low temperature. (The team used a Korean rice cooker to soften the meat.)
6. Make a small fried ball using ground rice.
7. Prepare a mushroom sauce.


Strawberry mousse cake and caramelized melon with black paper sugar lace and fruit sauce
1. Sprinkle pepper on the strawberries for the mousse cake
2. Boil the mango and apple to make puree. The chefs called this a “fruit flower sauce.”
(Choi Jin-bok, one of the Korean chefs, suggested sprinkling the pepper on the strawberries. According to him, the judges were charmed by this unique idea and taste, giving his team additional points for the dessert.)


What is a Black Box Contest?

The Black Box Culinary Challenge, hosted by Meat and Livestock Australia, started in 1996.
It was originally a competition for young South Asian chefs but it eventually expanded to teams from the Middle East, Africa and North America.
There have been over 70 Black Box contests, involving more than 3,000 chefs from 19 different countries.
Only chefs under 32 years of age can participate. The team leader, however, can be over 32.
The teams are given an hour to prepare a four-course meal using all the ingredients in the black box. A panel of international chefs judge the competition, assessing taste, skill, creativity and artistic merit.
Ingredients generally include Australian beef and lamb, seafood, spices, fruit, vegetables and dairy products.