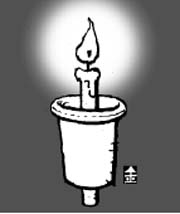 Candlelight is an important icon in the South Korean politics of the 2000s. At every political climax, candlelight appeared.

Since then, candlelight demonstrations have become prominent. Unlike previous demonstrations, these were definitely less violent. The possibility of violence was always there, but candles, songs, performances and free discussion replaced the Molotov cocktails, stones and tear gas of the 1980s. Hence, these demonstrations can be called cultural feasts.

The people who light the candles have become more diverse. Instead of just university students and laborers, housewives, children and youth have joined in. More people now demonstrate as a family.

The Internet has been a key aspect of these demonstrations. Even if the police try to find out who is behind the demonstrations, it is impossible to trace them through Web 2.0. Now demonstrators connected to a network gather instantaneously. The candlelight vigils are a form of civilian demonstration that has evolved into political participation, with people holding a candle in one hand and a digital device in the other.

There is talk of “an experiment in direct democracy,” as the June 2008 protests have ensued for more than 40 days. The portal site discussion forum where the demonstrators express their views is aptly called Agora. Here, we feel the people’s desire to recreate the direct democracy of ancient Greece through the Internet and candlelight. On the Internet, these people’s words surface.

On the other hand, novelist Lee Moon-youl expressed his concern that, “It is great, but a frightful digital populism.”

Yesterday marks the sixth anniversary since Hyo-sun and Mi-sun died. Candlelight demonstrations will be held tonight as well. Upset civilians are still there and the government is struggling. The candles may burn for a long time, as the government has lost the ability to stop the conflict between direct democracy and representative democracy.