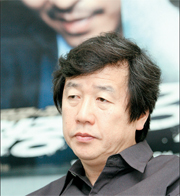 Cheol-jung, the stubborn detective from “Public Enemy” (2002) is back.

But this time, he is even more tenacious in hunting down vicious villains.

Kang is also well known for “Silmido” (2003), a blockbuster based on a botched assassination attempt on the late North Korean leader Kim Il Sung in the 1970s. 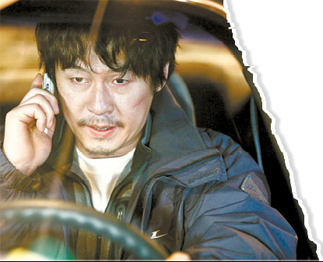 He feels his job isn’t secure enough and he wants to buy a decent house for his daughter and mother.

But quitting his job isn’t easy. Just in time, his squad uncovers a murder that involves the team’s longtime enemy Won-sul (Jeong Jae-young), the chairman of the Geo-seong group.

Even though Won-sul appears to be benevolent toward his family, he is in fact a malicious thug who recruits high school students as wanna-be gangsters.

“Some note the dangers in involving minors as gangsters in the story,” the director said.

But after Kang watched a current affairs program on television that dealt with professional gangs that enlist 17-year-olds, Kang couldn’t resist making the film.

He wanted his film to depict the reality of criminal organizations that trained minors to commit violent crimes.

“The film is much more than a simple gangster movie,” he said, noting that he was very careful not to depict too much violence in the film.

Instead, Kang suggests that the film could be called a “drama in action.”

“The action scenes might be less impressive [than his previous films]. I tried to emphasize characters and drama more this time,” he said.

To create more dramatic tension, Kang worked characters from the original 2002 film into the script.

The most familiar, of course, is Seol, back on the screen as Cheol-jung six years after his first outing in Public Enemy.

But filming was not always plain sailing. “He [Seol] said he wanted to return as Cheol-jung but as the day of filming approached, he asked if we could postpone the schedule,” Kang said.

The director had written Cheol-jung as a bit of an old fogey.

But there’s a reason.

“It’s been 20 years since I debuted as director and I haven’t changed much,” Kang said.

But in the first series, Cheol-jung was a young, hot-tempered detective. Wouldn’t he have changed after five or six years?

“I presume he would be exhausted from the grim realities of life,” Kang said. “It would be childish if Cheol-jung was still such a firebrand after so much time had passed.”

Kang was worried that the latest installment of the Cheol-jung franchise would be seen simply as a remake of the 2002 movie.

“I was most fearful that the film would be like the first one,” he said.

“I was up a blind alley,” Kang said. “I thought to myself this was the end. I wanted to take a risk on what I am most familiar with and can do best.”

Among his films, Kang cherishes the comedy thriller “Two Cops” (1993) and Public Enemy the most.

Though it was a commercial hit, Kang said he wants to remake Silmido.

“The film doesn’t have any humor,” he said. “If I had a chance to remake the film, I would add more funny bits. If there were more gags in the latter part of the film, the ending would be more emotional.”

That’s why humor is so strong in from the start of Public Enemy Returns, the director says.